Sexuality and Gender: Returning to the Sources 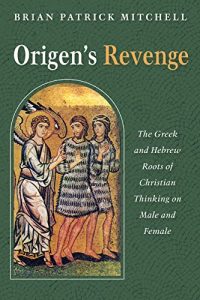 Once in a very long while one finds a volume that checks four boxes: it is a joy to read, academically fair and well-informed, timely enough to be essential reading in a current debate, and not so thick that it can double as a doorstop. Brian Patrick Mitchell’s book on Christian sexuality and gender is such a rarity. One is tempted to add that in the current cultural climate, with so much errant nonsense being written about sexuality and gender, that his book should be required reading for any wanting to opine on the topic.

Mitchell’s work examines (as the subtitle states) “the Greek and Hebrew roots of Christian thinking on male and female.” This involves not only a familiarity with the Biblical material itself, but (more challengingly) a mastery of the work of the Church Fathers on the subject. This latter requirement is daunting, which perhaps explains why so many writers quoting the Fathers tend to cherry-pick among them to bolster their already-chosen viewpoint. Mitchell, on the other hand, deals with the entire large and diverse gamut of the patristic material, and shows that the Fathers did not all walk in lockstep.

This volume is not so much a book promoting another agenda as it is an entire course in the history of sexuality and gender as these were understood in the ancient world. It surveys in depth the Greeks’ pagan understanding of male and female, and then the quite different Old Testament understanding. It then surveys the views of some Fathers which were in tune with the Greek view (Origen being foremost among them; hence the book’s title), and then the views of the Fathers which were more in tune with the Hebrew view. These views were, Mitchell argues, finally incompatible with each other. “The Church of the first seven centuries,” Mitchell states, “was of two minds on male and female” (which of course allows current writers to cherry-pick among them).

Finally, the author offers a model for the male and female relationship based on the inter-relationships of the Trinity. This new model, which offers a way out of the impasse that often blocks resolution of the issue, allows relationships to be “both ordered and equal based on one person being the self-giving source of a thanksgiving other.” This model provides for harmonious growth in relationships in addition to that of male and female, including those between parent and child, and between grown children with their parents.

With its probing analysis of the two primary sources for our understanding of sexuality and gender, Mitchell’s book offers a world about to go adrift the chance to recover stability through a return trip to the port. The set of coordinates needed are ever ancient, ever new.

Father Lawrence Farley is a priest in the Orthodox Church in America, pastoring a mission in Langley, B.C., where he lives with his wife.