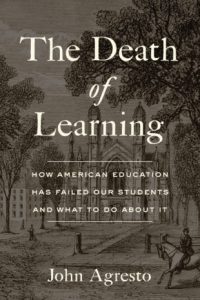 The Death of Learning: How American Education Has Failed Our Students And What to Do About It
by John Agresto.
Encounter Books, 2022.
Paperback, 272 pages, $30.99.

Successful interventions begin by telling the truth. The intervenor must be a trusted source, a close friend, one of the tribe, and he must speak plainly and truthfully, even if the truth hurts to say and hurts to hear: You’re a mess, the good friend says, and you need to face reality and fix yourself or you’ll lose it all.

John Agresto’s fine intervention into the shrinking universe of liberal arts education, The Death of Learning, a new title from Encounter Books, wastes little time. Agresto mouths the preamble required in any intervention, of course—that is, you’re important to me, I want what’s best for you, I’m your friend—before delivering a sharp slap to the face of liberal arts educators who delude themselves into thinking other people see their discipline as agile, respected, and sober, when, in fact, they are sleeping in a wrinkled tweed jacket in the gutter, too drunk on the spirits of yesterday (and last century) to say much of anything to the curriculum officer telling them to move along other than to belch about the importance of liberating the soul and educating the citizen—have you never heard of de Tocqueville?!—and maybe recite a couplet or two from Hamlet for gravity before crashing out lengthwise at the next faculty meeting.

It is a refreshing book. It is a needed book. Enrollments in English, history, classics, and other liberal subjects have torpedoed. Regardless of how many images of masterworks by Rembrandt and Michelangelo decorate a recruitment brochure, and no matter how many references to Dostoyevsky, Dante, and the Greeks that professors can cram onto an online humanities journal, students will not care to study the liberal arts if they think Latin, the history of ancient Rome, or the Great Books are useless to their ability to pay a mortgage.

Agresto intervenes by exploding conceits that hamstring the liberal arts. The one that really mushrooms is the idea that the liberal arts are “useless.” Useless is good. Useless means the knowledge found in the liberal arts classroom has no utility, no purpose, and no end except itself. Useless knowledge is knowledge free from constraint. It is libertas—the free and freeing knowledge that constitutes the free person. It is a line of thinking that traces back as far as Seneca, who, in speaking about the liberal arts, said, “I have no respect for any study whatsoever if its end is the making of money.”

Try telling that to today’s debt-saddled undergrad, or to the 72% of liberal arts graduates who said in a recent survey that they regret their decision to study liberal arts.

The liberal arts are useful, says Agresto, a former president of the liberal arts haven St. John’s College. And they must be spoken about as useful if the discipline is to survive. He points to vocational education as a possible model for how the liberal arts can demonstrate their utility. Snobs will roll their eyes when they read Agresto’s commentary and say, What could we possibly learn from shop class? Plenty: Practicality. Precision. Technique. Creative pedagogy. They need to learn something because, as low levels of student satisfaction and dismal employment rates for liberal arts graduates makes clear, what they are doing is not working.

Who deserves blame for the failures of the liberal arts? Agresto avoids the curmudgeon’s trap of condemning students and instead singles out the professoriate. It is the pipe-smoking chin-strokers who, convinced of the self-evident good of a useless education and of learning for its own sake, failed to defend the discipline and tradition against sloganeering radicals (“Hey ho Western Civ has got to go”) who decades ago argued that the liberal arts were not multicultural. This, Agresto argues, was always folly: “[A]t its best, liberal education has always been particularly multicultural, and it is truncated and diminished if it is not.” If any discipline was capable of absorbing and teaching the wisdom of multiple cultures it was the liberal arts, a discipline that has always drawn on multiple cultures and espoused a multicultural ethos before multiculturalism as a social movement ever existed.

But the discipline was unprepared for the tenor and tactics of the radicals. The liberal arts, and most of the academy, has since segregated into boutique “studies” departments that put individual cultures in opposition to one another. “[T]he saddest thing about the great multicultural movement,” Agresto says, “was not that it fell short of reviving the core with the important works and deeds of others but that it ultimately resulted in the non-integration of other cultures into a common core.”

The drawing and quartering of liberal arts is the death of learning. The politics of special interests and the politicization of classrooms by activists posing as educators tilts the classroom towards indoctrination, “the dark and evil twin of teaching.” The indoctrinated student is unable to think for herself, to see what is real, and to grasp the wisdom available through the liberal arts, ensuring that her education is truly useless.

To read The Death of Learning is to survey a moonscape. What could possibly grow in the liberal arts? Can the shambles of a discipline be made respectable again? Agresto follows the problems outlined in the first part of his book with solutions. These solutions retain an ambient quality. Readers may sense solutions when they read the second half of the book, but then, when the book is closed, they wonder what lies hidden in the hopeful talk about wonder and delight. Naturally, Agresto advocates for reforming the curriculum, with the provocative suggestion that universities discount the cost of tuition in the liberal arts—a fantasy but a good idea.

Given all that Agresto says about the failures of the liberal arts and the contemporary university, it is no wonder he advocates for the founding of new institutions that sound a lot like monasteries. The future is in the desert.

The Death of Learning suffers a few missteps. The first is a missed opportunity for a bit of righteous indignation. But this may be the nature of an intervention. Agresto’s calm, respectful, even clinical tone may loosen the addict’s grip on his delusions better than sob-screaming and throwing dishes.

A second misstep is harder to ignore. Of all the people to hold up as an exemplar of a liberal arts education, Agresto chose to single out Anthony Fauci, teller of noble lies, politicizer of public health, and funder of gain-of-function research. He is the kind of choice that can make a person discount everything Agresto has to say. If liberal arts programs promise to deliver more Faucis to the world, then shut them all down.

The Death of Learning makes one thing as clear as the air: Teaching the liberal arts well is a supremely difficult task. It was never easy and will never be easy.

Robert Grant Price is a writer, university and college teacher, and communications consultant.