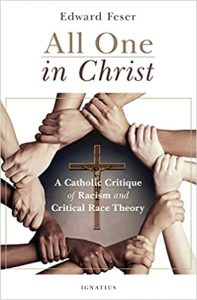 All One in Christ: A Catholic Critique of Racism and Critical Race Theory
By Edward Feser.
Ignatius Press, 2022.
Paperback, 163 pages, $17.95.

In All One in Christ: A Catholic Critique of Racism and Critical Race Theory, philosopher Edward Feser calls for the kind of unity advocated two millennia ago by St. Paul, whom Feser’s title quotes: “For all of you who were baptized into Christ have clothed yourselves with Christ. There is neither Jew nor Greek … for you are all one in Christ Jesus. And if you belong to Christ, then you are Abraham’s descendant, heirs according to the promise” (Gal. 3:27-29).

Feser is speaking primarily to Catholics, so his Scriptural reference is apt, and the unity in faith that he and St. Paul contemplate is compelling. But Feser’s point is also broader and philosophical. When the human person and his social reality are rightly understood, even on the natural level, genuine human fellowship can provide a unity that supersedes differences in race, ethnicity, and nationality.

All One in Christ surveys and compares Catholic Church documents with literature on Critical Race Theory (CRT) as they address racism. Feser defines racism as “the belief that not all races have the same basic rights and duties and/or supernatural destiny and, therefore, not all races should be equal before the law, find equal admittance to economic, cultural, civic, and social life, or benefit from a fair sharing of the nation’s riches.” Although Feser does not define “race,” he does not appear to limit the concept to skin color but to include groups with similar physical, linguistic, or cultural characteristics.

In the first sentence of his book, Feser observes that “[r]acism is widely, and rightly, condemned today.” In the pages immediately following, Feser shows that the Church has stood against racism from her inception to date. As the Second Vatican Council declared in Gaudium et Spes, “Since all men possess a rational soul and are created in God’s likeness, since they have the same nature and origin, have been redeemed by Christ and enjoy the same divine calling and destiny, the basic equality of all must receive increasingly greater recognition.”

That understanding of the human person informed the Church’s condemnation of chattel slavery that arose with the discovery of the New World. Feser cites an array of papal writings from Eugene IV (1435), Paul III (1537), Gregory XIV (1591), and Leo XIII (1890) that rejected slavery. He also reviews the seminal work of Francisco de Vitoria (1486-1546) and Bartolomeo de Las Casas (1474-1566) that defended the dignity and rights of indigenous people, and Francisco Suarez (1548-1617), who “reiterated [their] line of thought.” Feser concludes, “[W]hen the Second Vatican Council condemned slavery in the 1965 pastoral constitution Gaudium et Spes, … it was simply a continuation of what the Church had already been teaching for over five centuries.”

Feser presents the Church’s position on patriotism and immigration as more nuanced, observing “that a nation has the right to put conditions on immigration in order to protect its own well-being.” But that teaching is “in no way a concession to nationalism, racism, or xenophobia but precisely a corrective to them.” The Church claims the “sober middle ground” between those errors and the opposite error of “excessive individualism and globalism.”

As to CRT, Feser cites the work of numerous advocates but concentrates on the 2019 and 2018 bestsellers, How to Be an Antiracist, by Ibram X. Kendi, and White Fragility: Why It’s So Hard for White People to Talk about Racism, by Robin DiAngelo. The “fundamental assertion of CRT,” Feser argues, is that racism “permeates … every social institution and the psyches of every individual” and “goes especially deep in each individual white person.” He quotes DiAngelo as claiming that “racism … pervades every vestige of our reality.” Racism is systemic, according to CRT: “Modern history, Kendi [claims], has been nothing other than ‘a battle between racists and antiracists’, and our current situation remains so: ‘Our world is suffering from metastatic cancer. Stage 4. Racism has spread to nearly every part of the body politic.’”

Feser identifies a number of logical fallacies in the work of CRT authors, chief among which is the assertion that a denial of racism is itself a form of racism. “Objectivity and race-neutrality are illusions, claim CRT writers. What we see as true or good reflects the racial lenses through which we look at the world rather than the world itself.” But that captivity to racial context would equally defeat the objectivity and truth of CRT theses, leaving all in a sea of relativity, itself indiscernible to human reason.

Feser also presents empirical findings that offer alternative cultural explanations for discrepant outcomes among racial groups, including the importance of family life in social development. Still, logical fallacies and alternative empirical evidence do not appear to this reader to be Feser’s most serious objection to CRT. Rather, as a philosopher of metaphysics, epistemology, and anthropology, Feser seems most concerned that the account of reality, including of the human person and social relations, that underlies CRT is erroneous and contrary to that which informs Catholicism.

In that regard, Feser sees “Marxists and postmodernists” as “key influences on the development of CRT,” which reformulates their themes “in racial terms.” “Where Marxism speaks of the conflict under capitalism between the … bourgeoisie and … proletariat, CRT speaks of the struggle under ‘systemic racism’ between … ‘whiteness’ and … ‘people of color.’” Where postmodernism “takes all norms and truth claims to be culturally relative and masks for the vested interest of power, CRT identifies this power in the case of European and American civilization with ‘white supremacy.’”

Feser observes that “the Church has … condemned the key ideas of Marxism and … the relativis[m] … that [is] characteristic of postmodernism.” Marxism and postmodernism, as well as CRT, Feser argues, provide an account of reality that is fundamentally materialist and based upon hostile conflict among interest groups that is driven by a power struggle to defeat the adversary. The Church describes a different reality, one that is theonomic, harmonious, and ordered to a hierarchy of ends that return to God.

Catholic theology, as such, does not seek revolutionary liberation from political or social oppression, notwithstanding its preference for the poor and downtrodden. Rather, Catholic theology is premised upon salvation in Christ from a more primordial wound—human sin—the effect of which sometimes surfaces in political and social oppression. To that point, Feser quotes Pope Saint John Paul II, “The idea of Christ as a political figure, a revolutionary, as the subversive man from Nazareth, does not tally with the Church’s catechesis. … The perspective of [Jesus’s] mission is much deeper. It consists in the complete salvation through a transforming, peacemaking, pardoning and reconciling love.”

In Feser’s analysis, Marxism, postmodernism, liberation theology, and CRT pivot on conflict, power, and domination among classes or racial groups. The individual is marginalized, reconciliation is not possible, and division is necessary for victory. The Catholic paradigm, in contrast, sees each human person as created in the image and likeness of God, as equally, individually, and uniquely sacred, and as called to love God and others with full mind and body through spiritual and corporal works of mercy (e.g., Mother Theresa of Calcutta).

From the Catholic perspective, each individual directly engages reality without illusion and assumes personal moral responsibility for his actions by way of his rational nature that includes the faculties of knowing and willing. Man’s moral responsibility is therefore not transferable to, or derived from, a class, group, or collectivity but flows from his capacity to deliberate and to determine his actions.

Feser concludes by observing that “[t]he Church’s condemnation of racism is grounded both in our common nature as human beings capable of knowledge and of charity, and in the redemption from sin made possible for all by grace.” We thus are “all one in Christ,” and defeating racism entails “rational discourse and mutual understanding[,] … solidarity and mutual respect[,] … forgiveness and mercy.” Invoking Pope Francis, Feser calls for “the true face of love” to replace division.

All One in Christ thus issues a plea not only to Catholics but to all of pluralistic America to see one another as inestimable persons who are engaged in a common enterprise, live in a community, and are bound together in civic friendship. Each free and morally responsible person, even as nested in subsidiary communities, is part of an organic whole in which no part is at war with another. All parts, though bountifully differentiated, are ordered to the same common good of peaceable, just, and mutually enriching relations on the natural level and to our final and divine end on the supernatural level.

William H. Rooney is a practicing attorney in New York.