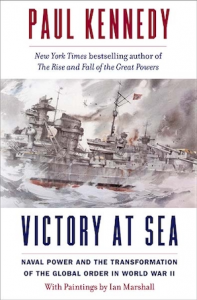 On the eve of Nazi Germany’s invasion of Poland in 1939, any observer would have easily seen that when it came to the seas, the Allies had an obvious and disproportionate advantage over the Axis. The United Kingdom and France had more than double the warship tonnage of Germany and Italy, more than double the number of capital ships, more than triple the number of cruisers, and about triple the number of destroyers. They possessed seven aircraft carriers; Germany and Italy possessed none. The only area where the European Axis powers maintained any advantage was in submarines, and just barely.

On top of that, the size of the British and French merchant navies was three times that of the Germans and Italians, which meant they were more capable of supplying themselves with the necessary war-time material from around the world. They possessed more global territory and colonies (and thus ports) than their enemies. Economically, the only (small) advantage the Germans and Italians enjoyed as it related to naval warfare was in steel output.

Nevertheless, as Yale professor Paul Kennedy explains in his masterful work Victory at Sea: Naval Power and the Transformation of the Global Order in World War II, the Axis retained an advantage that many military strategists dismissively downplayed when it came to the projection of naval power: aircraft. In the eight years leading up to the beginning of hostilities, the Germans alone built 30,000 aircraft, the Italians another approximately 9,000. The British, in contrast, had less than 18,000 aircraft, and the French about 8,600.

And that, it turned out, was a far more valuable chess piece than anyone, perhaps, even the Germans, could have predicted. The Luftwaffe—which included bombers, Stuka dive-bombers, fighters, coast patrol aircraft, and long-range reconnaissance aircraft—enabled German forces to land across Norway in April 1940 with little significant resistance from the British navy. “The overall Norwegian campaign was a disaster for the British and French governments,” writes Kennedy.

Yet, in an excellent example of Kennedy’s superb treatment of naval warfare history, Nazi Germany may have been the strategic loser in the Norweigan campaign. Acquiring a long, mountainous country required approximately 300,000 German troops to defend it for the remainder of the war—far more troops than the number of frontline troops available to Erwin Rommel’s Afrika Korps during the critically important campaigns against the Brits in Egypt. Moreover, making enemies with the Norwegians, whose government-in-exile soon resided in London, meant that the Norwegian merchant navy—the fourth largest and most modern in the world—would now be leveraged to support the British war machine.

Another significant strategic shift involved the role of battleships, which prior to the war were presumed to be the most impressive and perhaps most important piece of the modern navy. The story of the German battleship Bismarck alone put that idea to rest. Though the Bismarck in its short, eight-day operation in the North Atlantic destroyed Britain’s largest vessel (HMS Hood) and damaged is newest battleship (HMS Prince of Wales), it was not British battleships or battle cruisers that ultimately defeated it, but torpedo attacks by Swordfish planes from an aircraft carrier (HMS Ark Royal), which disabled the Bismarck’s rudder, and, consequently, it’s steering.

Prior to the war, naval strategists had not envisaged independent operations for carriers—they were viewed as “an auxiliary to the battle fleet” whose main purpose was long-range scouting. Many admirals doubted that carriers could operate without battleships as strike forces in their own right. And yet, as the Pacific Theater would so dramatically demonstrate—particularly at Midway in June 1942 when three U.S. carriers squared up against four Japanese carriers—carriers were the ships of naval warfare’s future. The artillery-laden steel behemoths Bismarck and HMS Hood—their remains resting at the bottom of the Atlantic—were vessels of the past.

So what ultimately turned the tide of the Allies, who were thrust upon their heels in the first three years of the war, ceding territory across Europe, North Africa, and Asia? Scientific and technological developments certainly deserve much of the credit, giving the Allies “ever-newer weapons, firepower platforms, and detection devices that their enemies could not match.” By 1940, the British were employing shipborne radar with great effect against the Germans in the Atlantic. The next year, Ultra, the name the Brits gave to their signals intelligence capability derived from breaking the German’s enigma encryption, provided another significant boon. The Germans, who lost an increasing number of their submarines because the Brits knew exactly where they were, never figured out that their encryption had been broken—German Admiral Doenitz blamed Allies’ aircraft patrols and long-range radar.

Even more than science and technology, however, was the role of the United States, which Winston Churchill called “that gigantic boiler.” It did not matter that the Japanese surprise attack on Pearl Harbor—which sunk four U.S. battleships and killed 2,403 American servicemen—was the most disproportionate engagement of the entire war. Once the American war machine got moving, it was only a matter of time before it would irreversibly change the course of the war.

The year the United States entered the war (1941), its warship tonnage was about equal to that of the United Kingdom, and a bit more than its primary naval adversary, Japan. The next year, U.S. warship tonnage was almost double that of Japan, and the following year about triple. By the time hostilities ended in 1945, U.S. war tonnage was almost ten times that of Germany and Japan. In 1942 alone, the United States built 47,800 aircraft (remember that Germany in the eight years preceding the war built 30,000); in 1943, America almost doubled aircraft production to 85,900 planes. The Germans, in comparison, built only 24,800 aircraft that year.

By 1943, the British and American fleets were prevailing in all three oceans. By the middle of 1943, “a giant new productive force was affecting the war,” observes Kennedy. The United States, he writes, was a “giant factory of war.” America was,

sending toward the battlefields a flow of armaments and weapons far larger than the world had ever seen, all from one single nation that proved capable of doubling its aircraft output in one year and of dispatching a new aircraft carrier virtually every month of the Pacific fighting. This was not just a history of campaign events. This was the history of something far, far bigger. This was about a shift in the global power balances.

America was wealthy—in raw materials, industrial capacity, technological development, and capital resources. And it had a numerical advantage: the U.S. population in 1941 was 133.5 million, compared to Germany’s 90 million. Thus the number of US naval personnel, not counting marines, doubled between 1939 and 1941; it more than doubled the following year; by 1945, it was almost thirty times its prewar strength.

Once the American juggernaut got moving, it proved unstoppable. At the Battle of the Philippine Sea in June 1944, the Americans threw 15 fleet and light fleet carriers and 900 aircraft against 9 Japanese carriers and 750 aircraft. Part of that battle, called the “Great Marianas Turkey Shoot,” witnessed the Japanese lose almost half its aircraft, while the Americans lost only 30. It did not matter that American military leadership made several miscalculations in the Pacific, as they did at the Battle of Leyte Gulf. American technological and numeric superiority was simply overpowering.

Of course, that is not to downplay the role of individual warfighters and tacticians, who made great sacrifices and demonstrated superb military tradecraft to defeat the Axis powers. Kennedy makes this clear throughout the book. He writes:

When the tides of war in the great Atlantic fight turned against the U-boats, it was because hundreds and hundreds of little ships, sloops, frigates, ore carriers, tankers, and cargo vessels, manned by tens of thousands of very brave crewman (Americans, Britons, Norwegians, and Greeks), steamed back and forth from New York to Liverpool.

He notes much the same when it comes to the Allied invasion of Normandy, which came after securing naval and air superiority in Europe:

It was not just a ‘vast impersonal force’ that came ashore on the five Normandy beaches at the very same hour on that morning of June 1944; it was the best-trained, best-organized, and best-directed army that the twentieth century had hitherto seen.

In other words, even when the odds swept in the Allies’ favor after the United States’ entrance in December 1941, victory still required individual men (and women) to do their parts.

Victory at Sea is impressive, not only for its narrative scope and expert historical analysis, but for its arrestingly wonderful artwork, completed by Ian Marshall, who died several years before the book’s publishing. It is also an important book, both because of what it tells us about the last great war between world powers, and what it portends for future conflicts. If, God forbid, our nation is drawn into another great power conflict, victory will likely require technological superiority, daring and creative strategy, and the heroism of our warfighters. The right cause will probably help, too.