The Authority of Reason 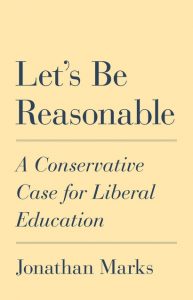 For those ready to give up on the university, Jonathan Marks provides encouraging counsel: “Regardless of what you have heard, our universities aren’t governed by balding radicals and their student disciples.” This calm rhetoric is typical of Marks’s apologia, which is marked by good humor, engaging anecdotes, and reassuring evidence that all is not lost in higher education.

Marks, who teaches Political Science at Ursinus College and writes for right-leaning periodicals, shapes much of his argument towards winning back fellow conservatives and classical liberals who have been pushed into a “lovers’ quarrel” with the contemporary university. They have been left angry, baffled, estranged. He assures all that “the present is not as bad a time as the shouting of culture warriors and the lectures of consultants might lead us despairingly to believe.”

But this is no Pollyannaish boosting. Marks does report sightings from the wilder shores of academic nuttiness and hypersensitivity. There are an awful lot of these, and the sheer numbers do not speak well of an institution that ought to be governed by reason. Worse yet, too much has been politicized, and those politics keep running in one direction.

Marks cites chapter and verse on the dominance of left-wing politics in the professoriate and amongst administrators and support staff. He might have drawn more attention to this latter group, which can be a bigger problem than the former. “Student life” personnel suck up ever more student bandwidth, and those employed by Centers for X and Offices for Y are set on leaving their particular mark on the institution. At the top end of the administration, when presidents, provosts, and deans reach out to the student body or publish public pronouncements, they habitually do so in order to fall in line with the hot-button left.

This activity runs along a spectrum that ranges from do-goodism to highly committed radical activism: that is, from center-left to far-left. Motives range from PR-level branding and virtue signaling to an authentically radical desire to seize power. Except at a small percentage of distinctive institutions or outlier departments, the ethos of the university lies well to the left. Yet Marks correctly points out that on any given day thousands of classes are being taught at several thousand colleges in which nothing untoward is happening. In many of them quite good things are happening, things which conservative critics would and should approve of. Some professors are already in the business of cultivating “reasonable people.”

While reasonable people are rational in their methods, the two words are not synonymous. One may have a hyper-developed set of thinking skills and lack judgment (Marks entitles one section “On Smart People Who Are Stupid”). One may be highly informed but unable to put that information to proper use. Thus Marks argues that the university’s job is to develop “a kind of person” rather than furnish students with a set of abstract skills. This “kind of person” is able to sift evidence and manage data, using proper judgement. Presumably this judgement will be informed not only by understanding of contexts, but also by ethical standards and empathy, even compassion when called for, but will not fall into the trap of emotionalism. Marks stresses that this ideally educated person will argue to find the truth and sustain community rather than to score a meaningless win or beat down the opposition.

Can this be done? Can we train people to steer clear of Twitter wars and tribal chest-thumping? “The odds against reason are long,” Marks admits, but the stakes are high and the goal is worthy. “Even the people who succeed in college by the various metrics we use to gauge success may be fools,” he writes. Yes, colleges must teach complex ideas and pursue new knowledge, but they must also cultivate students capable of “thinking slow,” of examining their own premises and prejudices and who are willing to acknowledge when they hear a better argument than their own.

Obviously faculty have a central role to play, but so do boards, governors, and administrators. Universities are adrift, substituting mission statements for an actual sense of mission. They cannot articulate a clear vision because they do not have one.

“The statements of purpose and principle that supposedly animate our colleges and universities may as well have been produced by Mad Libs. Adjectives, like integrative, interdisciplinary, interconnected, entrepreneurial, twenty-first century, complex, dynamic, and problem-solving, are distributed among brochures as if at random to make it appear that something buzzy is going on.”

Business-speak and ed-speak have formed a merger, and nowadays strategically chosen progressive shibboleths are likely to be scattered into this rhetorical agglomeration—call it viewbook hooray. What you cannot call it is reasonable, that is, calmly meaningful. Combining gaseous idealism with careerist reassurance, this is verbiage meant to wow prospective students at Visitation Day snake oil sessions. Once matriculated, these students will not find permanent sustenance in any of this, nor will they find it in the language of therapy that increasingly defines the university’s self-conception and occupies ever more student head-space. Marks could have addressed this last problem at greater length.

The inability of universities to articulate a clear purpose helps explain one of Marks’s key observations. While radicals comprise a minority on most campuses, and a small minority on many, they are nonetheless able to exercise an outsize influence. How so? Since most of the faculty is left-leaning and want to be seen as people of good will, when high-minded initiatives are introduced they do not demur despite harboring reservations.

Nor are they prone to argue against the sweeping descriptions that animate these initiatives and increasingly find their way into documents that are said to speak for the whole university. Thus the assertion that the university is beset by white supremacist culture and must be decolonized meets no overt faculty resistance, even though many will recognize the claim’s spuriousness. A different sort of assertion—for example concerns that the university is starting to assume too many traits of a cancel culture—will be kept to oneself. Many faculty, like the ordinary towns folk in an old Western confronted with the demands of bandits and bullies, studiously avoid looking straight at the danger—or they simply cave in. The faculty credo when faced with activist demands, says Marks, is: “We don’t want no trouble.”

There is much about Marks’s book that is attractive, including his notations on Locke and Mill and Tocqueville, figures one would expect to see, and who are treated intelligently. The uplifting of “old books” as remedies for modern stupidities and ego-driven blind spots is truly welcome, for I fear that resistance to them has only increased in the short time since Marks was writing this book. The odds seem long, but the goal remains worthy: to cultivate “the disposition to treat reason not just as a tool but as an authority.”

Matthew Stewart is Associate Professor of Humanities and Rhetoric at Boston University. He has published in online venues including City Journal, Law and Liberty, and The James G. Martin Center. He is the author of Modernism and Tradition in Ernest Hemingway’s In Our Time.