The Circumnavigation of Eliot 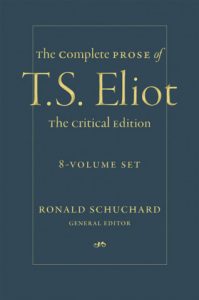 Acompany of scholars, led by Professor Ronald Schuchard, labored for a decade to produce this monumental scholarly work. It was published in digital form, beginning in 2014 and ending in 2019; then the printed version was published in 2021. The project was brilliantly and painstakingly accomplished, and it is having a marked effect on scholarly studies of Eliot by making available (and searchable) many works that had remained unpublished and many that were published in obscure places and were difficult to retrieve. This is not something that will be purchased or read by many of those who love Eliot’s poetry and plays; it is a scholarly resource for researchers and writers. While this does not sound like much of a recommendation, I hope to show readers of The University Bookman that they should rejoice at its appearance. For it will keep one of the greatest conservative writers of the last century on the center stage and force his many critics to come to terms with his genius, wit, and wisdom.

How to approach a short review of such a massive work? I propose to give an example of what a boon it is proving to Eliot scholars by offering some part of my research as a case study—and I hope readers will find the topic I have chosen interesting in itself. Some time ago I began following a lead from Russell Kirk’s book on Eliot and looking into the influence of Christopher Dawson on Eliot’s cultural and historical thinking. That led me to wondering about his responses to other historians. I found that he shunned historical determinists, whether of the pessimistic type (exemplified by Spengler) or the optimistic (such as Hegel, Marx, and Macaulay). Among those progressive historians, I became particularly interested in H. G. Wells, who was famous for his fiction but also wrote the immensely popular Outline of History (1920). In this book, Wells presents evolution as the driving force, not just of biological development but of cultural development. In his concluding chapter he predicts a time coming soon when hunger, disease, war, and all other ills will be eliminated by the triumph of rationalism and science over religion. His book was attacked by Hilaire Belloc, and eventually Eliot commented (in his journal, The Criterion) on the debate that ensued. He was somewhat critical of Belloc, but he came down finally in scornful opposition to Wells: “Mr. Wells has not an historical mind; he has a prodigious gift of historical imagination, which is comparable to Carlyle’s, but this is quite a different gift from the understanding of history. That requires a degree of culture, civilization and maturity which Mr. Wells does not possess.” I found this juicy denunciation by searching the complete edition of The Criterion, a resource Kirk studied extensively in preparing his book on Eliot. Now a researcher searching for references to Wells in Volume III of the Prose quickly finds this passage. And it is fairly easy work to discover all mentions of Wells throughout all seven thousand pages.

It is almost too easy: in the past, one had the pleasure of sifting through manuscripts and note cards and hard-to-find journal articles at the Houghton Library at Harvard or the collection at King’s College, Oxford. Now it is all available to anyone with access to a university library that pays the subscription for the electronic version or to anyone who purchases the print version.

As I pursued further research on the topic, making use of the Complete Prose as it appeared electronically, volume by volume, I began to think that Eliot was alluding to Wells’s evolutionary view of history in a passage in Four Quartets:

It seems, as one becomes older,

That the past has another pattern, and ceases to be a mere sequence—

Or even development: the latter a partial fallacy

Encouraged by superficial notions of evolution,

Which becomes, in the popular mind, a means of disowning the past.

Wells always sees history as a progressive “development,” leading to an inevitable utopian conclusion. His understanding of evolution is indeed “superficial,” and his progressivism is “a means of disowning the past,” an attitude adopted by “the popular mind.” As I proceeded in my research, with the aid of the Prose, I looked for more evidence that Eliot saw Wells this way.

As I mentioned, The Outline of History was aimed at a wide audience and was immensely popular, going into many reprints and editions. As early as 1924, we find Eliot emphasizing this popularity, linking Wells, as he often does, with George Bernard Shaw:

Those who belittle the importance of Oxford in the modern world should hesitate over the names of Arnold, Newman, Pater, and Bradley. None of these writers has had, or could have, the prodigious popularity and apparent influence of the author of Sartor Resartus, or the kingdoms of this world which have been conveyed to Mr. H. G. Wells and Mr. Bernard Shaw. (Prose, volume II)

This is expressed with acerbic wit: Wells and Shaw have been given “the kingdoms of this world,” while the great writers who preceded them are relatively forgotten. Later Eliot writes, “Liberalism had excited superficial curiosity. Never before had so much miscellaneous information been made available to everybody, in degrees of simplification adapted to everyone’s capacity for assimilation. The entertaining epitomes of Mr. H. G. Wells bear witness in their popularity; new discoveries are made known to the whole world at once; and everyone knows that the universe is expanding or else it is contracting” (Prose, V). Everyone is versed in scientific knowledge, but only superficially. Another time, Eliot writes that “[i]n popularizing the belief in the future in a crude form we have, I think, a good deal for which to thank Mr. H. G. Wells. His superficial philosophy has had an extensive influence” (Prose, V). This passage definitively combines two of the key ideas in the passage in Four Quartets: superficial understanding and influence on the popular mind.

Wells was not trained in biology, and hence his understanding of evolution was “superficial.” Taking a swipe at both Belloc and Wells, Eliot declares, “What a pity that Belloc supposes himself to be an historian, and that Wells supposes himself to be a biologist!” (Prose, III). Some years later, Eliot is commenting on a book by A. R. Orage and quotes Orage as saying that he hoped Shaw and Wells “may both live long enough to see themselves derided and their accursed doctrines numbered among the fads of the early twentieth century” (Prose, V). The application of evolutionary biology to human history was merely a fad, a whim of the time accepted only by people with little understanding of either evolution or history.

Finally, Eliot does emphasize the pernicious effect of Wells’s progressive historiography, which inevitably results in “disowning the past.” In 1932, he writes,

The doctrine of progress cannot make the future seem to us more real than the present. . . . But the doctrine of progress, while it can do little to make the future more real to us, has a very strong influence towards making the past less real to us. . . . The values of the past age are right only so far as they serve the values of our own—whatever our values may happen to be; if our values happen to be those of an H. G. Wells, then a peculiar account of history ensues. The notion that a past age or civilization might be great in itself, precious in the eye of God, because it succeeded in adjusting the delicate relation of the Eternal and the Transient, is completely alien to us. (Prose, IV)

Here he introduces another concept which will become central to Four Quartets: “The point of intersection of the timeless / With time.” Eliot’s understanding of history starts and finishes there. A few years later, Eliot returns to Wells’s disowning of the past:

Mr. Wells seems to propagate a strange false humility of evolutionism: as the higher apes are to us, he says in effect, so are we to the men of the future; and as we regard our animal ancestors, whether apes, lemurs or opossums, so will they of the future regard us. This is, of course, the quite natural corollary of a naïf faith in perpetual evolution, combined with a denial of any sharp dividing line between the human and the animal: that is, a denial of the human soul. (Prose, V)

If the evolutionary view is right, we must disown the past, as future people will disown us. We become, in the words of another passage in Four Quartets, “a people without history.”

I wish to end on a positive note, suggesting Eliot’s own belief. In a piece on Kipling, Eliot speaks of that author’s maturation, “the development of the imperial imagination into the historical imagination.” This imagination embraces the people of the past: “Kipling . . . aims, I think to give at once a sense of the antiquity of England, of the number of generations and peoples who have laboured the soil and in turn been buried beneath it, and of the contemporaneity of the past” (Prose, VI). This was written in 1941, as Eliot was completing and publishing Four Quartets, and I think we hear in it an echo of another passage from the poem, one in which he has a vision of people of long ago dancing around a bonfire in an open field,

Mirth of those long since under earth

Keeping the rhythm in their dancing

As in their living in the living seasons. . . .

Here is suggested a view of history that does not disown the past but sees its “contemporaneity” and significance.

One more mention of Wells in the final volume of the Complete Prose again compares him unfavorably to Kipling:

Kipling, as I have already suggested, was always fascinated by the supernatural. With this interest he combined an interest in machinery and in technique, and a gift for prophesying technical advances which makes him the peer of H. G. Wells in science fiction. To compare the two men is to elicit the simplicity, even naivety, of Wells, and the great complexity of Kipling. (Prose, VIII)

I hope I have provided a sense of how transformative this publication is for our collective understanding of Eliot. Just tracing this one line of inquiry, into Eliot’s view of Wells and his progressive historiography, would have taken a great deal of time, travel, and digging. There is something to be said for that, of course, but it is certainly a boon to be able to track down particular topics more quickly and thoroughly, clarifying the thought of this great man of letters and making others aware of his wise critique of superficial and harmful ideologies.

Benjamin G. Lockerd is Professor of English at Grand Valley State University in Grand Rapids, Michigan. He is the author of books on Edmund Spenser and T. S. Eliot, as well as articles on Eliot and on Renaissance literature. He also wrote the introduction to Russell Kirk’s book Eliot and His Age and has served as president of the T. S. Eliot Society.