The Economics of Everywhere and Nowhere 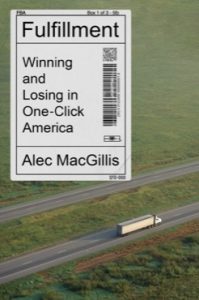 America is ground zero for the new economy taking shape that will affect all our lives in the years and decades to come. Different countries obviously have different economic circumstances. Yet across the West those circumstances are variations on a theme, not different in kind. These similar economic changes across different nations were reflected in the populist upsurge since 2016. Alec MacGillis’s book Fulfillment: Winning and Losing in One-Click America combines on-the-ground reporting with a drone’s eye view of America’s changing economic and social landscape through the growth of Amazon. This bleak book has lessons for those inside and outside America’s shores.

MacGillis builds his argument around the contrast between the old industrial economic dispensation of place with the new digital economics of placelessness. As a way into the new dispensation, MacGillis surveys the new landscape through the behemoth that embodies the new economy more than any other: Amazon. His style is journalistic and well crafted. What would otherwise be an impersonal tale is made poignant, even tragic, by the personal stories MacGillis relates even as he maintains emotional detachment. These range from Teresa Gandara and Sandy Grodin, office supply entrepreneurs in Texas; to Todd Swallows, a youngish Dayton man always with $0 to his name; to Taylor Sappington, an Ohio city auditor; or Bo Bodani, a retired Baltimore steelworker going back to work. These lives are caught up in the new world we’ve seen grow over the last twenty years, and they are all tied into Amazon’s reshaping of the economy.

The transition from an economics of place to one of placelessness has been accompanied by an attendant divorce of some parts of America from others. It’s a cliché that those on the West and East Coasts are detached from their fellow citizens in the heartland and south, but it’s nevertheless true, as MacGillis lays out. But it’s even more than that: the divide encompasses the differences between rural and urban, between one city and another, between “booming Boston and declining industrial cities like Lawrence, Fall River, and Springfield. Between New York and the struggling upstate cousins of Syracuse, Rochester, and Buffalo. Between Columbus and the smaller Ohio cities it was pulling away from: Akron, Dayton, and Toledo on down to Chillicothe, Mansfield, and Zanesville. Between Nashville, the belle of the Upper South, and its poor relation, Memphis.” One finds the same division between town and country, center and periphery in Britain and France, analyzed and lamented by David Skelton and Christopher Guilluy.

This is starkly illustrated by a divergence in mean incomes, with the entire Northeast Corridor and Northern California coast with incomes 20 percent above the mean. In contrast, huge tracts of the interior have incomes well below 20 percent of the mean. Meanwhile, the gap between Washington D.C. and the rest of America was twice as large in 2015.

Those that had recovered the best after the Great Recession were in a handful of metropolises in three states: California, New York, and Massachusetts. By 2019, 70 percent of all venture capital was flowing to these states. Since 2008–09, larger cities like San Francisco, Boston, and New York with populations over 1 million had prospered, accounting for around three-quarters of America’s employment growth. From 2010 to 2014, MacGillis writes, “just twenty counties accounted for half the new business formation in the entire country.” Washington D.C., like London in the UK, has rocketed away from those it governs: “By 2012, seven of the ten richest counties in the country, ranked by household median income, were in the Washington area.”

Part of the reason for this consolidation was the aforementioned changes in the economy. Once, economic development through industrialization had been spread throughout the country according to the locations of the various natural resources (coal, oil, water for steel etc) that the various industries required. As a result, cities and towns across the country saw the benefits of a dispersed economy with businessmen and entrepreneurs starting new ventures in different areas. This allowed, on the whole, for a more stable society on top of a solid material base, enabling the formation of rooted communities and solid families, committed to a place via the work they did.

In the digital economy, the opposite is the case. As Enrico Moretti has written, “in the twentieth century, competition was about accumulating physical capital. Today it is about attracting the best human capital.” Far from an economy based in intangible bytes being more dispersed geographically, it has become more consolidated in geographic and social terms, feeding the economic concentration. The outcome has been that “more than 44 percent of all digital-services jobs were in just ten metro areas” since 08–09. Because of this, those with similar social norms and mores flock together, cohering into ghettos of the mind as well as money, living with those they agree with and leaving their deplorable, retrograde fellow-citizens in the ruins of the economy and society they are burying, all behind a mask of compassion that hides contempt.

With a “winner-take-all economy came winner-take-all places,” MacGillis states. The fact that “the Democratic Party was, in a sense, becoming the party of upper-middle-class consumers and the people who packed and delivered things to them” is unsurprising given that as George Grant argued, “the directors of General Motors and the followers of Professor Marcuse sail down the same river in different boats.” Leftism advances corporatism, both acting as a solvent on social ties.

Amazon is, MacGillis argues, the perfect lens through which to view this change, as it has been a participant in our great transformation since the late 1990s, with more and more of America “falling under the company’s lengthening shadow.” Amazon embodies the new economy, where a smaller and smaller handful of corporations in media, retail, and finance dominate an economic realm once home to hundreds and even thousands of smaller companies.

The rise in income concentration and geographic divergence have been intertwined. Amazon has benefited from, and contributed to, this dance of social and economic death for so many. This is not an anti-Amazon attack book, but the company represents the new world in the disparity in income between its owner and workers; the atomization and instability it helped unleash on workers and communities; the huge influence through government subsidies ($100 million in 2017 alone) and lobbying of government (over $80 billion over the 2010s); and the monopolistic provision of the data and web hosting infrastructure we all increasingly live our digital lives through, ghosts in the machine, anchored to nowhere and no one. This erasure of tangible place and community is symbolized by the fact that data centers are often literally built on top of places where old industries were based and their workers lived.

Supposed conservatives in American and Britain hardly ever talk about the consequences of all of this for the social fabric and the ability of the less fortunate to participate in the common life. Indeed, those like Ben Shapiro laud Amazon as one of our best companies, ignoring the deleterious effects Jeff Bezos and his fellow tech oligarchs have on American, and wider Western society. Taylor Sappington is notable for not getting out of Nelsonville, Ohio, but returning and committing to his roots. The impermanence of Amazon employment mirrors the dissolution of solid social ties and communities into what Zygmunt Bauman calls “liquid modernity.” Those like Sappington’s partner drown: through various forms of long or slow suicide, enabled by opioids, drugs, and drink.

The old companies and firms with the jobs they provided these ignored and now denigrated places were predatory in their own way. But one can at least say they grounded a place, providing the material means for communities to form that were stable enough to endure. Families formed, stayed together, and passed on something of a legacy, adding their threads to the weave of history. The calls to just pick up and move when the jobs go ignore the value and good there can be when a family is locally rooted, able to commit to a local community as Sappington did, and not to instrumentalize the people and places of America for the maximization of one’s own autonomy through the market-state.

As Christopher Lasch argued, “conservatism … has allied itself with the very forces that have brought about the ‘progressive shattering to atoms of our social system.’” It’s all very well for conservatives to moralize about personal responsibility to people like Todd Swallows, whose life is a catalogue of disaster. But one’s life relies on a material basis for its flourishing, as well as the moral foundations to live well. The conservative focus on moralism at the expense of reasonable materialism is an expression of impotence in the face of, and even collusion with, the might of Michael Lind’s new Overclass who in fact hate the cultural values, norms, and mores conservatives claim to stand for.

If conservatives are sincere in pursuing the restoration of the means to live full lives in common with others grounded in a dispersed prosperity that the Democrats have neglected, they need to come to grips with where the power now lies in America and Britain: corporations and the managerial state. Until they do, they will not succeed in conserving anything. MacGillis’s book is a fine place to start in truly reckoning with America’s economic and social carnage.

Henry George is a freelance writer living in the UK. He holds an MA in War Studies from King’s College London. He tweets at @intothefuture45.