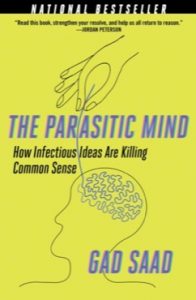 Considering the great damage done by leftist ideas throughout history and the great damage they do today, it’s a great mystery why they continue to have such a great appeal. Nevertheless, they do. They have infiltrated every major institution, even as they threaten those very institutions through their immorality, irrationality, and inconsistency.

On the surface, the popular evolutionary psychology professor Gad Saad attempts to treat this very question in his new book The Parasitic Mind: How Infectious Ideas Are Killing Common Sense. He frames the problem of toxic ideas as “pathogens of the human mind.” Ideas like postmodernism, cultural relativism, and radical feminism have entered the public consciousness and infected people with what Saad calls Ostrich Parasitic Syndrome, a condition that robs a person of their intellectual integrity.

Unfortunately, for most of the book, Saad’s supposed advantage of being a scientist proves to be his undoing. While an intriguing analogy, viewing the advance of leftist ideologies as a disease necessarily neglects its logic and motive. The problems that he aims to identify and solve are philosophical, not scientific, which renders much of his analysis either misplaced, misinformed, or superficial. He understands the “how” of leftist thinking—“a deep desire to liberate people from the shackles of reality”—but hardly bothers to consider the “why”—as in, why would so many people want to escape reality, especially at a time when the world has become so scientifically advanced?

Saad also has an ego that he just can’t suppress. It shapes the whole argument of his book, which chronicles his many confrontations with belligerent leftists. He makes it clear that he has bravely taken it upon himself to fight the forces of irrationality and invites others to do the same—that is, if they have the necessary “testicular fortitude” that he does.

These two problems make outlining his argument rather difficult. It begins as a straightforward approach to defining and later solving the problem of leftist ideology: “In this book, I set out to describe the confluence of forces that are endangering the West’s commitment to freedom, reason, and true liberalism (hence, the death of the West by a thousand cuts).” But this purpose quickly switches into storytelling as Saad regales his reader with endless examples of leftists spewing nonsense.

Despite the veneer of psychological terms and academic diction, most of Saad’s points are rather obvious and lack serious insight. All too often, otherwise mundane phenomena are gilded with scientific-sounding descriptors like “peripheral processing,” “fundamental attribution error,” or “homeostatic processes” for normal functions like acting on impulse, misunderstanding a situation, or reverting to the status quo. Thus, what is supposed to work as a critical diagnosis of the culture mostly comes off as a laundry list of leftist excesses—the kind of thing one expects from the typical conservative podcast, not a book from a distinguished scholar.

As he goes through his observations, Saad includes many personal anecdotes where he confronts various leftist ideologues. Some of these stories are entertaining, though too many of them amount to bragging—in one instance, Saad even says without irony, “my sarcasm and satire are sharper than a surgeon’s scalpel in slicing through entrenched deposits of nonsensical bullsh**.”

Of the many loose strands of the first five chapters, Saad ends up emphasizing a few key themes: victimhood, subjectivism, and virtue signaling. These are recurring patterns with the left, particularly in academia, and particularly in Canada where he resides. Although for Saad, there’s no great strategy behind leftist ideology or its philosophical underpinnings. Occasionally, he suggests a few analogies from evolution, but mostly he dismisses these ideas as “lunacy” and leaves it at that.

Fortunately, he makes some progress in considering the method behind the madness in his sixth chapter, “Departures from Reason: Ostrich Parasitic Syndrome.” He notes how leftism is often “rooted in illusory correlations, non-existent causal links, and feel-good progressive platitudes.” This is how otherwise educated people can blame global warming for Islamic terrorism, believe that parroting “Diversity is Our Strength” somehow resolves the difficulties of mass immigration, and insist that using politically correct language actually solves political problems.

And yet, just as Saad gains some momentum in his sixth chapter, the next chapter, “How to Seek Truth: Nomological Networks of Cumulative Evidence,” is an enormous letdown. In it, he shoehorns so much of his research on sexual differences and Islamic extremism, proving that that men and women are different and that Islam lends itself to violence. Somehow, Saad believes that using evidence across disciplines will do the trick of convincing the other side, as though no one else has tried this already.

A predictable conclusion follows, in which Saad tries to rally his reader to action and fight. To do this, they would follow Saad’s example and argue with others on social media and beyond: “If your Facebook friends are posting comments with which you disagree, engage them and offer an alternative viewpoint.” For those who demur from provoking their friends and family, Saad insists that they “Grow a pair” and “Stand Tall,” just like he did once when he took on a random heckler on Twitter and won.

Needless to say, Saad’s great commission is underwhelming and again betrays a certain obtuseness. While he has made a career out of being a credentialed contrarian (or, as Saad puts it, a “honey badger”), most people are not tenured celebrity professors palling around with Sam Harris, Jordan Peterson, and Joe Rogan. They are people with real jobs and real responsibilities, and they face real consequences when they decide to call out others for bad opinions.

With such a relevant issue, and such an admittedly brilliant writer as Dr. Saad, this book could have been so much better. Two components in particular that were missing were humility and focus. Instead of condemning his opponents as brainwashed enemies of reason, he could have tried to better understand them and their arguments. Instead of pointing and laughing at the whole wild world of progressivism, he could have focused on his area of expertise, the university, and explained how progressive ideology is killing the mind.

Ironically, it’s in these two missing elements of the book that readers may find a solution to the problem of bad ideas becoming popular. Instead of playing whack-a-mole with each new leftist trend—be it Critical Race Theory, Socialism, or Transgenderism—it would likely be better to focus on an enduring truth and approach the other side humbly rather than giving the radicals what they want by picking a fight.

If The Parasitic Mind proves anything, it’s that the world would probably be more reasonable and harmonious if fewer people engaged in these kinds of debates. They are not constructive and mainly serve to build up the brand of personalities like Saad. Contrary to the book’s claims, bad ideas do not go away with freer speech, or better arguments; they go away when people turn off the screens, retreat from the noise, and reacquaint themselves with reality.