The Enduring Mystery of War 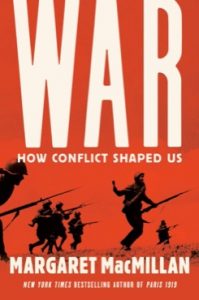 Times were tough for Ötzi the Iceman. Found thirty years ago in the Italian Alps, the multi-wounded corpse of the five-thousand-year-old hunter confirmed for archaeologists the reality of our violent, prehistoric past. But we have come a long way since 3300 B.C. The evolutionary psychologist Steven Pinker in the seminal The Better Angels of Our Nature: Why Violence Has Declined (2011) argues the human race has been steadily putting violence and destructive wars behind us due to, among other things, improved rationality and a more enhanced sense of empathy. Other social scientists agree that the human carnage of the twentieth century’s world wars represent a statistical blip in a longer trend of human progress and peace.

Although it may appear wars are declining in both frequency and intensity, we retain a deep fascination for war. Perhaps less inclined to wage war, we still love war games and war stories. War dominates our historical memory and still provokes fear about the future. War, arguably humanity’s most enduring, destructive, and transformative activity, has a strange habit of coming back. Historian Margaret MacMillan, acclaimed author of Paris 1919 and Nixon and Mao, offers some serious reflections in War: How Conflict Shaped Us and suggests we ignore the persistent reality of war at our peril.

MacMillan argues we should do more to educate the next generation on war. She laments that studying war in universities has become passé. In her first history department, she proposed a course on war and society. Her department head instead suggested “A History of Peace.” Peace Studies programs have some popularity in academia, based on the logic that explicitly studying war itself might produce future militants.

Yet our peace-loving disposition is hardly an absolute condition. MacMillan reminds us “public opinion” can be pro-war too, even in democracies. The British people were gung ho for war in 1914, and its elected leaders like Lloyd George refused to consider peace when the war effort bogged down. Erich Maria Remarque published his anti-war best seller with All Quiet on the Western Front in 1929, but MacMillan states pro-war books then were even more popular. Public opinion often fails to brake ambition; the German people’s positive reaction to the 1938 Munich Settlement appalled Hitler—they feared a new war; he feared he would not get one.

Countering a current view on gender, Macmillan doubts that women suppress the war instinct. The “women warrior” image is rooted in Greek and Nordic mythology and in the reality of nineteenth-century Dahomey. Women’s more active role in societies has not necessarily led to a greater peace instinct. The suffragists, brave defenders of the franchise, were vocal defenders of Britain’s entry into World War I. Since then, women unsurprisingly have lent strong voices to both sides in the war debate.

It is a stubborn fact that we have limited vision and short memories when it comes to war. We know it is destructive, unpredictable, and very difficult to end. Even wars for a good cause like World War II lead to ambivalent results. We also have a poor record, MacMillan reminds us, of predicting how the threat of war will transform itself. New technologies continue to make war unthinkably destructive. Human rights groups actively wage campaigns against the new computer-driven “robot wars,” probably because these technologies might urge leaders to think war can be waged with lower human cost. Former bold predictions that the nation-state was fading away have proven exaggerated. Now we see potential conflict arising from rival “great powers.”

The reader might regard some parts of this ambitious, readable book as debatable, but the central message that we need to continue understanding war is more urgent than ever. Our alleged growing rationality on one hand may be leading us to become less warlike, but on the other hand, it has enabled us to become cleverer in designing ways to kill each other. Indeed, our very emphasis on rationality perhaps lulls us into overlooking that the expression of our species’ tendency towards war might be about to occur.

Clausewitz famously called war a game of chance. We know war will shape us, but we cannot be sure how. MacMillan acknowledges the benefits, some unintended, that have been derived from war. Certainly war brings out our worst qualities, but sometimes, our best. War has inspired great art and human philanthropy. Wars have led to the creation of nursing as a profession and important advances in public health and beneficial new medical technologies. World War II and the Korean War probably helped propel civil rights in the United States. By highlighting the paradox that war often leads to peace and prosperity, MacMillan echoes the thesis of anthropologist Ian Morris in War! What Is It Good For? (2014) that war sometimes has served as an important engine for progress, making our societies ultimately richer and safer.

The quest for progress is only one motive for war. Macmillan revises Thucydides’s famous drivers to “greed, self-defense, emotions, and ideas,” but the concepts are the same. Emotions, like fear, often drive war; think of all the preventive wars, from the Second Punic War to America’s 2003 invasion of Iraq. Honor also plays a prominent role. Foreign Secretary Sir Edward Grey specifically cited honor as the reason for Great Britain’s entry into World War I. Still, these drivers have never been fully satisfactory explanations. Sometimes all are abundantly evident, and yet war fails to break out. War only seems inevitable after the fact. MacMillan agrees that social science cannot disregard the unpredictable human element in why wars happen.

Perhaps our biggest challenge in times of peace is to remember how terrible war is. Great art assists us to do this. MacMillan’s most compelling chapters relate how art has attempted to interpret and commemorate war. Art records war’s horror and terrible reality, but also its fleeting glory and sometimes “strange beauty.” Her moving description of how we remember war through cemeteries, monuments, and rituals is an indirect rebuke to current campaigns to erase important artifacts of the past.

Perhaps missing in this book on how war shapes us is its role in molding both souls and nations. Thucydides’s great contribution was not just describing how a terrible war in ancient Greece happened, but how it debased morals and ultimately undermined Athenian society. The war led to moral callousness, enabling an advanced democratic state, for reasons of brutal self-interest, to destroy the neutral state of Melos. The trauma of World War I inured many veterans to violence, leading to vicious political movements like Bolshevism, Fascism, and National Socialism. As Americans learned after Vietnam, war both expanded the reach of the state, and undermined people’s faith in it.

Despite this omission, MacMillan’s book is an important reminder that war will change us, in ways we cannot predict. After centuries of experience, we still often fall back on regarding war, in Macmillan’s words, as “a reasonable and manageable tool,” which could be a fatal conceit in our present era.

Michael J. Ard, Ph.D., is the program director for Intelligence Studies at American Public University System and teaches “The Origins of War” in Rice University’s Master of Global Affairs program.