The Moral and Cultural Basis of the Free Market 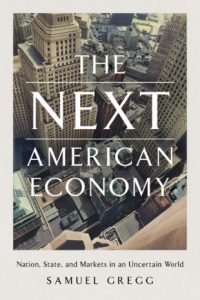 The Next American Economy: Nation, State, and Markets in an Uncertain World
By Samuel Gregg.
Encounter Books, 2022.
Hardcover, 336 pages, $30.99.

I am often asked for book recommendations that defend the moral, social, and cultural underpinnings of capitalism. Slightly taken aback and unsure where to start, I often end up pointing them to Novak’s The Spirit of Democratic Capitalism or McCloskey’s voluminous series on the virtues of bourgeois culture. But now I have a fresh and compelling recommendation: Samuel Gregg’s The Next American Economy.

Frankly, I loved Gregg’s book. It has all the hallmarks an excellent book should: clarity, relevance, fairness, eloquence, and persuasiveness. But it provides something even rarer—an inspiring vision. Gregg wrestles with the problems and economic debates of our time and offers a commercial republic as a compelling alternative to our current economic malaise and national moroseness.

Now, it is only fair to warn  the reader that this book is not a work of technical economic analysis. Gregg does not give precise details about import substitution, deadweight loss, or the tax incidence of tariffs. He does not speak in the language of econometrics or dynamic stochastic general equilibrium models. Instead, he attempts to persuade on the level of shared citizenship, prudence, history, and political economy.

In the first part of his book describing and assessing “State Capitalism,” Gregg addresses economic problems of state capitalism such as inefficiency, decreased productivity, slower innovation, worse products, and stagnant wages. State Capitalism describes both the status quo and the current trend of the American economy. It refers to the idea that markets should be managed by governments, particularly when it comes to matters of trade, industrial policy, and determining what kinds of investments companies should make. Gregg marshals compelling historical evidence of the detrimental effects of tariffs, of industrial policy, and of departures from traditional profit and loss incentive structures. Then he goes much further.

The Next American Economy recognizes that “Americans are not simply economic beings, and America is more than an economy.” The deeper problem with state capitalism involves moral, political, and social corruption. Gregg rightly notes that tariffs make for bad economics and bad politics—encouraging businesses to devote huge resources to lobbying politicians and regulators for favors in order to charge consumers higher prices and face less competition. When companies lobby the government, they put fewer resources towards producing high quality products more efficiently: “Lobbying for tariffs to be applied to one’s industry or business is not a cost-free exercise, but the potential payoff is very big.” Political connections become more important than productivity.

Gregg argues that advocates of tariffs and industrial policy on the political right are gravely mistaken, not only about the efficacy of those policies, but in their interpretation of the times. With the rise of Trump, alarm bells have not stopped ringing about China. The former president argued that China has been “winning” at trade while the U.S. has been “losing.” Not only that, but China has made impressive advances through their industrial policy while the U.S. sat on its hands. According to this narrative, the U.S. needs to get its act together quickly to deal with China’s rise by creating significant trade barriers and engaging in constructive industrial policy.

This narrative has gained significant traction in recent years. Supposedly, U.S. policymakers were asleep at the wheel over the past two decades, lulled into somnambulance by the bromides of free market and free trade “extremism.” In that time, China has vaulted onto the world stage as the primary U.S. rival—aided and abetted by naïve trade policy. To this narrative Gregg says, “No, no, no!”

China’s rise has been greatly overblown. Their economy has several serious problems: corruption, low levels of innovation, massive amounts of debt, significant misallocations of capital, horrendous demographic trends, and relatively bleak investment prospects. And this should not be surprising! Industrial policy has these effects. China’s rise over the past 30 years has been driven largely by its openness to trade and its embrace of certain market principles in its special economic zones. The more China departs from those policies, as President Xi has indicated they will, the greater the problems their economy will face. Any narrative suggesting that emulating Chinese industrial policy will strengthen the U. S. economy is, to quote Macbeth, “a tale told by an idiot.”

Yet many on the political right have bought into such a narrative. They call for a new American industrial policy without recognizing that industrial policy supplants the beliefs and values of millions of citizens with the pet projects and beliefs of a few hundred politicians and bureaucrats. Peddlers of industrial policy du jour have little respect for personal responsibility, risk-taking, local knowledge, and entrepreneurial spirit. And like tariffs, industrial policy redirects the attention and energy of business leaders towards Washington and away from their customers and from society.

Gregg documents failure after failure of industrial policy in Japan and China. He also points to failures of U. S. industrial policy from attempts to promote textile industries to the recent Foxconn fiasco in Wisconsin. His examples illustrate what Austrian economists have called “the knowledge problem” of central planning; namely that important market information regarding what should be produced, by whom, where, and in what way, is decentralized among thousands or millions of market participants and cannot be apprehended by a single mind or government body.

Finally, Gregg argues that state capitalism undermines the profit and loss structure of markets by welcoming stakeholder capitalism under its wing with Environmental, Social, and Governance (ESG) mandates and Diversity, Equity, and Inclusion (DEI) initiatives that have little to do with economics, wealth, and productivity, and everything to do with elites exercising social control over citizens through the “soft despotism” of economic exclusion. “Woke capitalism” is not a product of the market. Its success stems from the support of government agencies.

Gregg rightly points out that these efforts at social control will not lead to a healthy dynamic economy. Instead, they create bitterness, division, and conflict in society. These insights are not unique or original to Gregg, though they are eloquently expressed in the first part of his book. But the more substantial contribution of the book consists of the positive vision Gregg casts as a glorious alternative to state capitalism: a commercial republic.

American greatness, as understood by the founders, rested on its freedom and openness, which contributed to its economic, political, and moral strength. We feel threatened by China largely because our economy has much less dynamism and our society is riven by doubt, animosity, and self-loathing: “Getting America’s own house in order is the sine qua non not only for dealing with a belligerent China, but also for reattaching the market economy to a distinctly American political regime.” Gregg recognizes how unhealthy American political economy has become over the past 15-20 years. The regulatory state chokes business and innovation, tightening its grip every year. Tariffs, industrial policy, and stakeholder capitalism compound the problem by further stifling economic growth and dynamism.

The U.S. already fits the state capitalism mold more than we would like to acknowledge. Our problem, according to Gregg, is not too little industrial policy, tariffs, and government intervention in markets, but far too much! Ironically, protectionists on the right and the left proffer salvation in the very policies that have brought us low. But we have a better alternative; not the starry-eyed optimism of free trade and free market utopianism, but the clear-eyed recognition of the power of markets, freedom, and trade to build a robust healthy society. Gregg points out that most advocates of free trade, from Adam Smith to Milton Friedman, recognized that national defense concerns are reasonable. They knew that exceptions to free trade could be warranted for the sake of important geopolitical concerns.

Similarly, even the politicians most associated with free trade naivete, Bill Clinton and George W. Bush, understood that trade with China was no guarantee of its inevitable liberalization. They spoke of the beneficial pressure of trade and its tendency towards liberalization—not of a naively deterministic inevitability of perpetual peace and friendship among nations simply because they trade with each other.

In contrast to stakeholder capitalism, a free competitive market creates more space for disagreement and for tolerance. As Milton Friedman observed in the first chapter of Capitalism and Freedom:

No one who buys bread knows whether the wheat from which it is made was grown by a Communist or a Republican, by a constitutionalist or a Fascist, or, for that matter, by a Negro or a white. This illustrates how an impersonal market separates economic activities from political views and protects men from being discriminated against in their economic activities for reasons that are irrelevant to their productivity—whether these reasons are associated with their views or their color.

Market transactions award or punish companies for their economic output, not the social, political, or philosophical views of their owners, managers, and employees.

And in a free market, no one needs to fear economic deprivation for holding an unpopular or politically incorrect belief. As Ronald Coase (1976) noted: “The great advantage of the market is that it is able to use the strength of self-interest to offset the weakness and partiality of benevolence, so that those who are unknown, unattractive, or unimportant, will have their wants served.” These kinds of transactions based upon simple value and exchange are the antithesis of “State Capitalism.” They are free from the meddling, the virtue signaling, and the domineering tendencies of elites.

The concluding chapter paints an inspiring picture. There is greatness in free trade. There is joy in economic dynamism. And there is power for those who govern wisely and with restraint. This was the vision from the beginning of the nation’s history. Gregg writes:

[George Washington] sought to teach Americans that the yet-to-come greatness of their country was inseparable from freedom of enterprise. Washington presents ‘unrestrained’ trade between America’s East, South, North, and West as binding the country together….[endowing] Americans with ‘greater strength, greater resource, [and] proportionally greater security from external danger’.

The best answer to China, and the best answer to our own economic fears and uncertainty, is to return to our initial political aspirations—forming the greatest, freest, and most just commercial republic the world has ever seen!

Paul D. Mueller is associate professor of economics and chair of the politics, philosophy, and economics program at The King’s College.