The Place of Punctuation in Literary Art 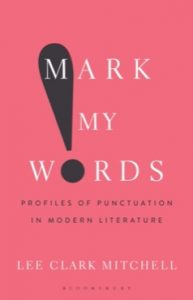 Many literature professors have long expressed their embarrassment at simply professing literature. Not content to be custodians of a literary inheritance—and not to be outdone by their counterparts in the physical and social sciences—these professors have sought to justify the field’s existence by importing and imposing any number of theories. This theory-mongering has in turn given rise to the faulty notion that literary study necessarily progresses, as does scholarship in the sciences, with the latest theory discrediting or correcting the previous one. It is true that a healthy interdisciplinarity should be cultivated; it is equally true that new angles of vision can produce valuable ways of reading literature. But what happens when scholars and critics seek to subordinate the field’s primary objects of inquiry—novels, poems, plays, and the like—to secondary matters?

Most current literature scholars are fixated on activism, not aesthetics, on the politics of “cultural production,” not the poetics of literary creation. This state of affairs has rendered approaches to artistry in literature, whether in a manner similar to the American New Critics, the Cambridge “Leavisites,” or the Chicago Neo-Aristotelians, something of a disciplinary taboo (unless artistry is made ancillary to sociopolitical or historical-material concerns). Roger Shattuck warned his fellow critics years ago about the threat to literature as an art. “[W]e should beware,” he wrote, of “the temptation to subordinate literature to the claims of any extra-literary discipline to superior authority or knowledge.” Shattuck understood, of course, that literature “is not autonomous and unrelated to our daily lives; on the contrary, we all to some degree live by and through it.” Yet he rightly affirmed that “it does not belong to any domain outside the domain of art, and we are shirking our responsibilities if we look the other way while self-styled ‘literary’ critics deliver literature into the hands of one or another branch of the social sciences.”

Given the fashion for subordinating literature to everything unliterary, one is delighted to find a book committed to the close reading of novels, stories, and poems. With Mark My Words: Profiles of Punctuation in Modern Literature, Professor Lee Clark Mitchell continues the focus on form and style that made his Mere Reading: The Poetics of Wonder in Modern American Novels (2017) one of the more stimulating studies of fiction in recent years. Mitchell’s books, along with others by Annette Federico and Rita Felski, are cause for hope; they suggest that literature in academia cannot forever be theorized away or reduced to something else.

Mark My Words sets out to examine how modern American, British, and European writers take punctuation beyond its practical applications. “Many of the most distinguished efforts of human expression,” Mitchell says, “occur in ineffable prose and poetry, and those efforts exist as much in the resonances evoked in unexpected words as in the suasions induced by unforeseen typographical marks.” One question Mitchell wants to answer is, “How … do nonverbal marks of celebrated writers’ prose reveal at once characteristic styles and encompassing visions?” More specifically, Mitchell asks: “What is achieved in the preference for full-stop periods instead of hypotactic clauses, for parentheses and dashes rather than lingering commas?” He proceeds to answer these questions through a series of close readings that place a writer’s punctuational choices under the microscope.

The chapters on Ernest Hemingway and Henry James are arguably the most compelling in the book. Hemingway’s style has had its share of first-rate commentators, among whom Carlos Baker and Robert Paul Lamb come readily to mind. Mitchell’s discussion of Hemingway’s punctuation nonetheless adds some welcome insights. Hemingway’s pared-down prose, concealing its deeper meanings below the syntactical surface (iceberg style), tends to exploit full stops “in preference to more modest comma-laden pauses.” Mitchell wonders why. He parses scenes from “Hills Like White Elephants,” in which a man and woman engage in a conversation that is “something of a forced march around an unidentified dilemma.” The story depends for its success on indirection and clipped dialogue exchanges, whose “bland tenor” hides “psychological abysses.” The characters’ back-and-forth consists of lines ending in periods and question marks (a mingling of finality and uncertainty). Mitchell suggests the aptness of the period in a story that subtly reveals the dissolution, the end point, of an affair. (Oddly, however, he does not comment on the relation of these “pregnant” periods, marks of “termination,” to the woman’s implied abortion.)

At the end of the chapter, Mitchell provides a brief look at Hemingway’s impact on Cormac McCarthy’s prose in The Road. McCarthy’s sentences in that novel are sparse and fractured, mirroring the post-apocalyptic wasteland the author evokes. Hemingway’s syntactical influence, according to Mitchell, is present in “McCarthy’s stripping away of even the most modest pauses, relying instead on abrupt full stops, effectively divest[ing] the landscape of continuity itself.” One only wishes Mitchell had allotted a complete chapter to McCarthy, since his style is most rewardingly comprehended through its opposing registers, from the Melvillean-Faulknerian baroque of Suttre and Blood Meridian to the Hemingway-esque terseness of All the Pretty Horses and No Country for Old Men.

Moving from Hemingway’s laconism, Mitchell ventures to the other side of the stylistic spectrum to analyze Henry James’s ornate use of the em dash. James’s fictions, often written in a dense, involuted prose which conveys the intricacies of consciousness, are the works of an artist “clearly drawn to dramas of psychological wavering.” As Mitchell notes, dashes “represent a breaking off, or a turning to some prior moment or state of belief, or simply an effort to start anew, in anticipation of fresh possibilities.” Only the em dash could equip James with what he needed to translate the false starts and abrupt stops of individual thought into suitable literary expression. Of particular interest to Mitchell are elaborate late works like The Ambassadors and “The Beast in the Jungle,” both of which, delving human interiority, display James’s mature mastery of the dash.

Mitchell’s interpretation of “The Beast in the Jungle” shows the extent to which James made punctuation a vital element in his art. The story’s protagonist, John Marcher, obsessively anticipates the arrival of some momentous yet unknown event in his life, all while ignoring the devoted May Welland, who has patiently awaited Marcher’s acknowledgement of her love. But it is to no avail: Marcher’s tragic fate is sealed. The story’s epiphanic conclusion, as Mitchell reads it, implies “a stymied sense of life blocked by punctuation, with dashes prominent but compounded as well by semicolons, parentheses, periods: all representing the psychological resistances [Marcher] has suffered, from which he had never been able to break free into sinuously self-possessed, unremitting, and integrated prose.” This penetrating explication is one of the best in the book.

Mitchell goes on to explore the “hemorrhaging effect” of run-on sentences in the novels of James Joyce, Toni Morrison, José Saramago, and W. G. Sebald. He also investigates James Baldwin’s “comma-laden habit,” which “characterizes all his writing, early and late, fictional and nonfictional, occasional essays and fire-breathing exhortations.” Regarding Mrs. Dalloway, Mitchell argues that Virginia Woolf’s semicolons direct “sentences that never quite finish but linger instead protractedly, extending into byways, modifying themselves even further, in the process accommodating an unfurling mode of contemplation.” Nabokov’s Lolita gains “its most playfully calculated insights” from Humbert Humbert’s “surprisingly ubiquitous parenthetical interruptions.” We learn as well of Faulkner’s genius for punctuational “plentitude,” his knowing “how fully punctuation marks—and all other iconographic gestures, ligatures, signs, and spacings—succeed not simply in guiding expression but in creating meaning.” And Mitchell treats poetic punctuation and its absence, underscoring the audacity of the dash in Emily Dickinson and the potency of enjambment in E. E. Cummings, William Carlos Williams, and Nikki Giovanni.

The book is not without flaws. The chapters run short, sometimes leaving us feeling shortchanged. Moreover, Mitchell too frequently brings in a writer to illustrate a point—as he does with Willa Cather or Andre Dubus II—only to abandon the example as soon as our curiosity is piqued. A fuller study, with expanded and additional chapters, would be ideal; yet, starved as we are of authentic criticism, we are grateful to Professor Mitchell for what we get. Mark My Words indicates that not all is lost, that a renascence of serious literary study may be closer than we think. We should, in any case, continue to read, write, and teach as if such a thing were inevitable.

Oliver Spivey is a PhD candidate in English at Oklahoma State University. He studies 19th- and 20th-century American literature. His critical writings have appeared (or are forthcoming) in such outlets as Areo Magazine, VoegelinView, Academic Questions, and Literary Matters.