The Politics of Scale 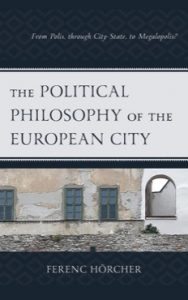 The Political Philosophy of the European City: From Polis through City-State, to Megalopolis?
By Ferenc Hörcher.
Lexington Books, 2021.
Hardback, 298 pages, $110.

I grew up in a small city at the southern end of the Australian mainland. It was a cold, windy place that was home to 150,000 souls. There were two iterations of Geelong (pronounced “jillong”). One was the industrial, low socioeconomic iteration, which was clustered to the north and east of the city center. The other half was wealthier and bourgeois, stretched around the Barwon River to the south.

The northern suburbs of Corio, Norlane, North Shore, and Bell Park were densely filled with government housing, accompanied by light and heavy industry, flanked by the ports of Corio Bay. These areas were populated largely, though not exclusively, by ethnic Serbs, Croats, Macedonians, and a smattering of other Eastern European peoples.

I played field hockey as a child, and the sporting center for hockey players was in Corio. This was a twenty-minute drive from the leafy, Anglophone southern suburbs in which I dwelt. It took me fifteen years to realize how affluent Newtown was, and my home street was particularly magnificent. Large plane trees lined the footpaths that I regularly rode along to get to the library or football ground. I passed huge private schools with imposing, ivy-covered walls, and students who wore blazers. I attended the local public school, so these strange jackets were a novelty for me.

Cities like Geelong are at the kind of scale that allows for real knowledge of the place, but also of the people. While 150,000 is far too large a number to know well, there would have rarely been three or four degrees of separation between myself and the stranger on the bus or the fellow spectator watching the Cats at Kardinia Park. (Going to a Cats game is the closest thing to a civil religion that Geelong has.)

The latter is difficult to communicate in a brief space, of course, and the descriptors I have used of ethnicity and economic status could be considered artificial and limited in their use. But the reader hopefully understands my point. The city of Geelong is more than a space, a plot of land, or a jurisdiction. It is also its civitas, or its people. The urbs shape the civitas, and the civitas shape the urbs. They are intertwined.

Augustine of Hippo exhibits little interest in the urbs of a city. In his De civitate Dei, Augustine identified the people as the city. But it wasn’t just the people; it was the people and their highest love that provided an explanation for what the city actually was. The city’s telos was pivotal as well, with Books XXI and XXII providing the climactic description of the destinies of the cities of God and Man.

Augustine’s disinterest in the urbs doesn’t mean he doesn’t think the urbs are valuable. In Book XIX, he affirms the goods of the earthly city as both real and useful. But he leaves us without any real sense of what it is about the urbs that we can rightly value and use. What does the earthly city offer?

De civitate Dei is just barely a work of political thought. It is definitely not a work of political theory, given that it provides no particular description of actual life in a city, no advice about what to do in particular, and no practical wisdom about living in an urbs. Nor does a book like De civitate Dei suggest what urban life might offer us by way of practical political reflection.

Ferenc Hörcher provides this in The Political Philosophy of the European City. Anyone who appreciates the philosophical method of Aristotle, which focuses on the concrete, on what is actually before us, will agree that lived experience in the city must offer guidance for us today. Hörcher focuses on “the realm of human activity,” and on different “political [cultures] of different historical sorts of urban milieu,” to “address some of the political challenges we are confronting here and now.”

Hörcher works out his conviction that wisdom, prudence, practical reason, or phronesis, is garnered largely by experience and tradition. This is a deeply conservative disposition that is worked out theoretically in A Political Philosophy of Conservatism, where Hörcher says, “to find the proper act in politics is to see and understand past examples, to confront the moment, and to have a strategy for how to proceed in the future.” Looking to the European city as a historical and philosophical source, Hörcher finds wisdom for confronting the political moment.

Hörcher’s approach could be described as historical, as he walks the reader through a narrow history of experience, thought, and practice of European polis life. His distinction between the urbs and the civitas undergirds the analysis of life in the European city, be it twentieth century Buda, ancient Athens, or early modern Geneva. The urbs are pivotal to understanding the aims and conventions of city life. They provide a window into the civitas. For it is the latter that expresses itself, for better or worse, in the former.

There is also a subtler distinction used in The Political Philosophy of the European City between the traditional republican conception of citizenship and the modern, Rousseauian understanding of state citizenship. This undergirds Hörcher’s rich exploration of the way that people occupy and utilize the urbs, along with the role of political authority in the city. It is richly illustrated by Hörcher through a wide variety of literary and artistic depictions of polis life, ranging from Ambrogio Lorenzetti’s fresco Buon governo, through to Auguste Rodin’s sculpture Les Bourgeois de Calais. The highlight of these is Hörcher’s own recollections of life in Buda, where he still dwells today.

Hörcher’s tour starts in contemporary Buda and works backwards through Renaissance Florence, Venice, and Siena, the Germanic cities of the Holy Roman Empire, medieval Europe, to Plato’s and Aristotle’s Athens. The latter isn’t, by any means, meant to be a climax. Hörcher is no Whig historian in reverse. Rather, his conviction is that by looking for patterns of practice, conduct, and understanding in the cities of Europe, we ought to be able to discern wisdom for today.

This wisdom is summed up in the phrase “the conservative urban republican heritage of the European city.” The bourgeois, or burghers, of the city partook in civil governance of a mixed and balanced kind, a practice that was understood to lead to order and flourishing. Order and stability were the temporal aims of any republican government in a city. The latter was not limited, of course, to commercial success, though this was of substantial import to any city government. The flourishing sought by the pre-modern (and early modern) burgher was also spiritual, with the civitas being marked by religious piety. The good of the city was understood to rest upon this.

The book’s substantial argument concludes with a reflection on the importance of scale. Does the megalopolis, like Melbourne in Victoria, lend itself to good governance or the good life? Or is Geelong a better model for this? The size of the city can either encourage flourishing or decline, a philosophical problem that goes at least as far back as Aristotle.

The question of scale leads Hörcher to reflect on the way that the urbs of a given city lend themselves to the flourishing of the civitas. To paraphrase the Christian scriptures, the city is made for man, not man for the city. Smallness provides freedom, a freedom of the civitas from external domination. A larger scale brings a certain order. Yet it seems that the larger the scale, the greater potential for disorder and disconnection between citizens.

Connection to other living souls establishes a sense of piety. That is, in dwelling in a community we find ourselves “belonging” to a people and place, and such belonging leads to the organic instantiation of duties towards others. Hörcher argues that because of this fact, “it is … possible to talk about trust, gift, and good will in connection with one’s homeplace,” and to begin to work together with others towards “human flourishing.”

If this is true (and I believe it is), then the city needs to be on a scale where this kind of organic community can lead to piety, which can then lead to communal works of human flourishing. Scruton, in The Face of God, suggested that the places that are our homes are such because the buildings in them represent those people. And this is because they are built to have their own face. Scruton is, of course, not talking about the desolation of modern apartment buildings, but rather an architecture that presents a human scale and expresses, however imperfectly, that a human soul lives therein.

And so the political philosophy of the city, as presented by Hörcher, rests on the humanity of the city. The city needs to be humane in order to accommodate humankind. The dehumanizing effects of the modern city are, unsurprisingly, driving many out, who understandably seek a level of autonomy, scale, personality, and space that befits a human person. Hörcher also shows that the city is not to be abandoned, but rather reconsidered. Recapturing the scale and wisdom of the traditional European city is surely central to this.

Which brings me back to Geelong, the place where I was nurtured, the place where I matured and grew into a man, where I learnt the ways of piety. It remains, to my mind, a city of scale. It is no European city, mind you. It has no walls and certainly no deep history of polis-craft. But Hörcher shows me, and shows us through his book, that the city, whether Geelong or any other, is a place of wisdom and a place of piety if one knows where to look for it.

Simon P. Kennedy is the Director of the Millis Institute and Senior Lecturer in Humanities at Christian Heritage College in Brisbane. He is also a Research Fellow at the Institute for Advanced Studies in the Humanities, University of Queensland.