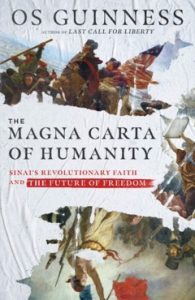 The Magna Carta of Humanity: Sinai’s Revolutionary Faith and the Future of Freedom
By Os Guinness.
InterVarsity Press, 2021.
Hardcover, 288 pages, $25.

Conservatives are by default skeptical of revolutions. British statesman Edmund Burke in his Reflections on the Revolution in France declared: “A revolution will be the very last resource of the thinking and the good.” More provocatively, he asserted: “I never liked this continual talk of resistance and revolution, or the practice of making the extreme medicine of the constitution its daily bread. It renders the habit of society dangerously valetudinary: it is taking periodical doses of mercury sublimate, and swallowing down repeated provocatives of cantharides to our love of liberty.” The revolutionary spirit, conservatives fear, tends to instability, chaos, and ultimately violence, as it did in the France of 1789, the Russia of 1917, and the China of 1949.

Even the American Revolution, many conservatives argue, represents less a dramatically novel political experiment than an attempt to restore centuries-old legal norms and practices that were being threatened, if not obliterated, by an extractive, exploitative British monarchy. (Prominent contemporary conservatives like Patrick Deneen and Michael Hanby of course dissent from this interpretation of American political history.) Is there any type of revolution that conservatives can unreservedly embrace? Prolific writer and social critic Os Guinness, author of The Magna Carta of Humanity: Sinai’s Revolutionary Faith and the Future of Freedom, believes there is, though to perceive it we must extend our gaze back in time, beyond the revolutions of the modern era.

Guinness orients the reader to what he calls the Sinai, or Exodus Revolution, by which he means that historic moment when the Jewish people ended their time in slavery and became a people with a unique religio-political identity, founded upon the worship of the one, true God and His commandments. “There is no rival to the Exodus Revolution in its realistic and constructive understanding of freedom,” he claims, referring to the Torah, or first five books of the Hebrew Bible, as “nothing less than the Magna Carta of humanity.” He contrasts this with the French Revolution of 1789, which he identifies as influencing our secular, increasingly woke civil order.

Relying on the work of the late Rabbi Jonathan Sacks, Guinness identifies the Sinai Revolution as a coherent presentation of what the Founders later described as “ordered liberty.” This, he says, is a “morally responsible society of independent free people who are covenanted to each other and to justice, peace, stability, and the common good in their community.” That political vision, Guiness believes, was deeply embedded within the Framers’ own understanding of the ideal republic. He quotes, among others, John Adams, who several years after his presidency wrote: “I will insist that the Hebrews have contributed more to civilize men than any other nation. If I were an atheist, and believed in blind eternal fate, I should still believe that fate had ordained the Jews to be the most essential instrument for civilizing the nations.”

According to Guinness, one can apprehend seven foundational principles that illuminate this revolutionary social, political, and religious revolution, one that serves as antithesis for contemporary revolutionary impulses. First and foremost, freedom requires an objective. We see this at play in the Sinai Revolution in YHWH’s assertion “I am who I am” (Exodus 3:14), a statement that later exegetes would interpret to mean that God is reality itself, and the source of all truth, goodness, and beauty. Man is free only because God is free, and it is the divine ordering of reality that gives both purpose and limits to that liberty. To reject God, then, has not only religious, but also socio-political consequences, because it vitiates authentic freedom.

Many of the other Hebraic principles proposed by Guinness (channeling Rabbi Sacks) follow from the first. Freedom must be “grounded and authorized,” meaning that freedom flows from the decision of a loving God who creates man in His own image, thus giving man an intrinsic worth and dignity that demands he be treated with justice. Freedom must be “realistic,” meaning that unfettered liberty is actually detrimental to human flourishing, and that freedom demands responsibility and restraint. Freedom “must be won” and “ordered and cultivated,” meaning that humans must actively practice the duties of citizenship in order to develop and preserve their liberty as members of a covenantal, constitutional community. Freedom must be “celebrated and handed on,” meaning that we must prize the great narratives, principles, and heroes that helped secure our liberty. Finally, freedom must “always address wrongs, but in the right way,” that way being one of mercy, forgiveness, and justice, rather than tribalism and enmity.

There are many strengths to Guinness’s account of ordered liberty. Identifying the truly radical character of the Hebrew religio-political experiment is, if not a novel approach, at least an underappreciated one. The Jews themselves, as well as their descendants in Christianity, have recognized the revolutionary character of the God of the Bible. “You turn things upside down,” the prophet Isaiah says of YHWH (Isaiah 29:16). “The Lord maketh the earth … waste, and turneth it upside down,” observes the psalmist (Psalm 146:9). The Roman historian Tacitus in turn noted: “Moses introduced a new cult, which was the opposite of all other religions. All that we held sacred they held profane, and they allowed practices which we abominate.” First-century observers then accused Christians of having “turned the world upside down” (Acts 17:6).

Yet what is so perennially curious about the Jewish (and Christian) revolution is how thoroughly conservative it was. Yes, in choosing the Hebrews to be a people “set apart” for His own purposes, YHWH initiated a remarkable, unprecedented shift in human history. But it was also, in another sense, a reditus, or return, to the Garden of Eden. The Jews were chosen to understand and practice divinely originative, eternal truths Adam and Eve had forfeited at the Fall. The Jews were then to communicate those realities and traditions to their progeny.

Ironically, what in the ancient world made Judaism and Christianity so revolutionary—their strict regulations regarding marriage and sexuality, their uncompromising understanding of human dignity, their zealousness regarding moral and intellectual consistency—is now what their detractors label as traditionalist, archaic, and backward. Guinness understands this well, and each chapter offers extensive discussions of how our contemporary culture in its libertinism, moral relativism, and woke dogmatism, has abandoned the Sinai Revolution. America (and the West), are in many respects returning to their pagan, antihuman roots, often under the mantle of modern intellectual movements like postmodernism, Marxism, or scientism. “Major spheres of American society,” he observes, “have shifted their loyalties and now support ideas that are closer to the French Revolution and its heirs than the American revolution.”

Guinness’s prescription that we must return to the tenets of the Sinai Revolution is right. It is also not particularly novel or interesting. There are at this point hundreds of recent books of varying intellectual and rhetorical quality identifying and analyzing the many threats to the American cultural-political system bequeathed to us by the early colonists and the Founding generation. The Magna Carta of Humanity is well-researched and well-written, but apart from creatively orienting readers towards the Hebraic roots of American constitutionalism, conservative readers familiar with the growing corpus of this specific subgenre of sociopolitical commentary will find Guinness is traversing territory already well-trod by many other critics.

Moreover, Guinness’s account is in certain crucial respects incomplete. In focusing on the unique Hebraic influence of American constitutionalism, he elides the invaluable contributions of, among others, the Greeks and Romans. A consideration of the book’s index demonstrates how little the author is engaging with classical writers—Plato, Aristotle, and Cicero, among them—whose influence on the Founding cannot be easily overstated. In his introduction Guinness explicitly asserts: “The present global crisis of freedom does pivot partly on the tensions between Sinai and Athens, including ideas from Athens that were rediscovered during the Renaissance. But the truly critical clash of our time stems from the differences between Sinai and Paris.”

That Guinness, a Protestant, refers to classical ideas “rediscovered during the Renaissance” with little elaboration—given the centrality of classical thinking to medieval scholastics like Thomas Aquinas who predate the Renaissance by centuries—is curious, to say the least. The angelic doctor, concernedly, makes no appearance in The Magna Carta of Humanity. This is part-and-parcel of Guinness’s apparent lack of appreciation for Catholic contributions to modern conceptions of liberty that can be traced to Tertullian. Rather, Guinness asserts that “key ideas from the Hebrew and Christian scriptures” were “rediscovered through the Reformation.”

Short shifting the political theory treasures of Catholicism by extension bypasses the broader Catholic project of synthesizing the great truths and traditions of the Greeks and Romans, from the Church Fathers to Nicaea to the scholastics. Thus Guinness speaks of the need for “patience and persistence” in the cause of liberty, but neglects to cite the Aristotelian conception of virtue as a moral habit that secures true freedom, one that then informed the Framers. He speaks of the “requirements” of participation in a social and political system, but makes no mention of Cicero’s De Officiis, which was standard reading among the colonial elites. Aquinas, in contrast, makes extended use of both of these venerable ancients, and many others besides.

Each chapter of The Magna Carta of Humanity ends with the same four-sentence warning that America must return to the Hebraic truths rooted in the revolution of 1776, lest she devolve into the horrors that followed the revolution of 1789. Even if true, it soon becomes redundant to the point of patronizing pedantry, a distraction from an otherwise insightful, if incomplete consideration of freedom by an important scholar. Perhaps Guinness could have exchanged those wasted words for a more robust reflection on liberty, one that recognizes that its most coherent articular is one that unites the best thinking not only of the Hebrews, but Greeks and Romans. It is that synthesis that enabled Christianity to think and speak so beautifully about transcendent truth. And it is that same synthesis that informed a group of American colonists to attempt one of the boldest, most exciting political experiments in human history.