The Socialist You Should Be Reading 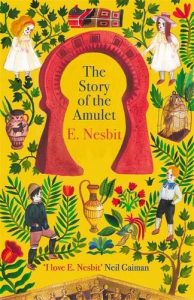 Edith Nesbit is the ideal children’s author. Her imagination is vast, her skill for verisimilitude acute, and her ear for combining the two is perfectly tuned. She never makes the presumed oral reader a slave, but creates an enjoyable, respectful partnership with the other adult in the room. The foregoing, sadly, dissects her like a frog. The proper way to present her would be to grab your hand, hollering that there’s a really cool frog on the porch that you have to come see right now!

Nesbit is a clear forerunner of other similarly talented authors. Her facility in both realism and high fantasy is familiar to anyone who grew up switching between Madeleine L’Engle’s fictional structures of Chronos and Kairos. Literary homage is also evident in Susan Cooper’s The Dark is Rising series (published 1965–1977), which echoes Nesbit’s nimble navigation of reality and fantasy. But debts to Nesbit are paid even earlier: C. S. Lewis tips his hat to Nesbit on the first page of The Magician’s Nephew, naming her Bastable children as a reference point for readers of his own story.

Nesbit is also one of the most lasting original voices of the Fabian Society. Wife of founder Hubert Bland, toleratrix of his dalliances, and rearer of his illegitimate children alongside their own, her books for children remain popular today: a chapter of Bastable hijinks is included in the 2000 Random House Book of Humor, and the Psammead trilogy was re-released in 2017 by Virago Press. But Nesbit today is neither a progressive’s progressive, nor a conservative’s. Her child characters function under an ethical system of unknown etiology which, combined with her pagan narrative elements, make for an uneasy worldview. Socialism is a regular and occasionally explicit theme in Nesbit’s books, but she held a view of domestic life far higher than that tolerated by contemporary socialists.

The question is, do we want kids reading these books? If Narnia and Middle Earth are literary icons of the true and the good such that we do want children reading them—though we’re not so sure about Madeleine L’Engle, some people aren’t sold on Harry Potter, and Philip Pullman is right out—where do we shelve Edith Nesbit? The answer is perhaps found by studying The Story of the Amulet (1906), the final installment of the Psammead trilogy, and the book in which Nesbit’s pagan and socialist themes are most explicit.

Nesbit’s Psammead books follow a family of five children. Their lives are upended when they discover a number of fantastic creatures and devices that allow them to make wishes and travel through space and time. They are sinner-saints who have arrived at their moral code … somehow. They have a keen sense for personal integrity, and rarely need adults to enforce corrective efforts when the time for being good in the first place has passed. But the children do not talk about or go to church, and Sunday is just another day in their week. Nesbit’s biographer, Julia Briggs, notes that the Bland/Nesbit household made a fashionable conversion to Roman Catholicism from the Church of England around 1900. However, their observance included little more than fish on Fridays, and almost nothing of the Mass. We should not be surprised to find a similar piety in the families of Nesbit’s imagination.

Also reflective of Nesbit’s personal spirituality are her books’ occult themes, largely drawn from the theosophical movement and its entailments. The Story of the Amulet is premised upon historical mythologies. This is what makes it so interesting, but also cuts several ways for the contemporary reader. Positively, Nesbit’s knowledgeable incorporation of ancient myth is one way in which she appeals to readers who have the fun of knowing what is being referred to. For example, when the children visit a “learned gentleman” who lives upstairs from them and works at a museum (the British one), he must remove from a chair “things like bricks that tiny, tiny birds’ feet have walked over when the bricks were soft.” However, the sad reality is that many children today may be shut out from the deeper joys of The Amulet, having been schooled in contemporary dreck rather than Odysseus and Gilgamesh.

Nesbit’s amoral reality in combination with her pagan fantasy can leave the Christian reader wondering what exactly is supposed to be gotten out of this book. Some parents may wish to mention to their children how strange it is that Cyril, Anthea, and the rest didn’t go to church on Sunday. The Amulet also occasions a rarer disclaimer that invoking pagan deities by way of incantation and talisman is inadvisable for the baptized.

Perhaps this is reactionary. On the other hand, C. S. Lewis seems to think that The Amulet takes things a bit far. In Surprised By Joy, Lewis relates how strongly myth figured into his personal conversion. Lewis relates his need to “exorcise” himself of the lust-like effects of myth’s appeal, giving the example of his Space Trilogy as a response to H. G. Wells’s science fiction: “The exorcism worked by reconciling it with, or subjecting it to, the other, the more elusive, and genuinely imaginative impulse.” Lewis does the same with The Story of the Amulet, in which the Queen of Babylon causes chaos at the London Stock Exchange. This is Lewis’s source for the disastrous appearance of Jadis of Charn at Digory’s house in The Magician’s Nephew. Lewis likely expected his readers to recognize this. He primes them on page one to listen for Nesbit, but then gives them something better. The remainder of his Narnian cosmogony reworks The Amulet’s ethos for a Christian audience.

Lewis’s pagan elements are the diction and syntax of myth. Readers then have the joy of translating his myth into the eternal story he intends to tell. But Nesbit’s trilogy ends with the cosmos as a slurry of beautifully wrought humanist impulses, in which there is supernatural power but no real divinity. Susan Cooper’s The Dark Is Rising is a direct descendant here, as is the oeuvre of Steven Spielberg.

Nesbit’s socialism also attracts the attention of conservative readers. Knowing Nesbit herself is again informative. Her social circle was the Fabian Society, founded by her husband and their close friends. Hubert Bland was opposed to women’s suffrage and argued forcefully for female domesticity in his own writing. Nesbit also held these views, and lived them out as an apparently conventional wife and mother (though things were, admittedly, knotty at home). This set them at odds with a more widely held Fabian sympathy to “women’s rights.” Nesbit’s writing also reveals doubts about political solutions that are today accepted without question by virtually everyone.

The Story of the Amulet offers evidence of the difference between Fabian socialism and the socialism of Alexandria Ocasio-Cortez. Nesbit’s Queen of Babylon sees through fin de siècle London’s sociopolitical excuse-making immediately:

“But how badly you keep your slaves. How wretched and poor and neglected they seem,” she said, as the cab rattled along the Mile End Road.

“Of course they’re working. That’s what slaves are.… You’ll have a revolt of your slaves if you’re not careful,” said the Queen.

“Oh, no,” said Cyril; “you see they have votes—that makes them safe not to revolt. It makes all the difference. Father told me so.”

“I don’t know,” said the harassed Cyril; “it’s just a vote, that’s all! They don’t do anything particular with it.”

One can hardly imagine such disrespect shown to the hallowed franchise by any contemporary person. Later, Nesbit’s children travel to the future. Their encounter seems a likely manifestation of Nesbit’s personal socialist ideal. Edward Bellamy’s 1888 futurist novel Looking Backward deals with work-life balance with a precociously stale plan for universal nurseries, and solves the problem of female unhappiness by making shopping easier. Nesbit, who went to the trouble of raising her own children, knew better. She lands her characters in a beautiful park: “… on the grass babies were rolling and kicking and playing.… Men, as well as women, seemed to be in charge of the babies and were playing with them.” Nesbit’s proposal for childcare is not dividing the family further, but better integrating it.

The visiting children meet a child pointedly named Wells. He describes to them his world, in which children love school and are helped to learn about things that truly interest them. Wells’s mother is horrified to hear what conditions are like when the children are from. When the time travelers offer to give their futuristic friends a glimpse of old Fitzroy Street, it goes poorly:

… a beggar and a man who sold matches were quarrelling at the edge of the pavement on whose greasy black surface people hurried along.…

“Oh, look at their faces, their horrible faces!” [Wells’s mother] cried. “What’s the matter with them all?”

“But it’s not all! They’re ill, they’re unhappy, they’re wicked!”

The idea that personal wickedness may contribute to the plight of the poor is anathema to contemporary socialists. Nesbit’s social critiques are safely put in the mouths of visitors from the past and future, and include some perspectives that may resonate better with conservatives of our own time. We ourselves, of course, are time travelers when we pass judgment on the London Nesbit describes. But we may also observe that the poor we still have with us, despite a century of “progress” in which the Fabian program of slow but constant advancement has been quite successful. Nesbit’s view of domestic life would also have her declared No True Socialist by the AOC crowd. Bland and Nesbit failed in their efforts to keep the Fabians traditional at home, both immediately and in the long term.

Time heals all wounds, and it is fitting that a book about time travel, and its extraordinary author, should be included in the cure. The socialism of Nesbit’s day, even in its most emblematic group, afforded greater latitude to more traditional views. Nesbit’s commentary on social justice in her children’s books is unlikely to offend conservative readers. It may well offer a useful opportunity to discuss the topic more with children.

Readers who are exceptionally wary of snuggling up to pagan pantheons may hesitate to pick up The Story of the Amulet (and a number of other works; notably those included in Man-Size in Marble and Other Horrors, a Nesbit creepy story collection republished in 2015). However, George MacDonald and Russell Kirk wrote ghost stories, and Narnia is populated by all manner of heathenish creatures. The difference lies in what we know of Nesbit herself: that whatever Christian faith she had existed alongside stranger spiritual notions.

But Nesbit’s religious interests are no longer prevailing temptations. Theosophy and the Ancient Near East religions fare poorly in the current religious market. Children from theologically robust households are actually those best equipped to critique the conclusion of The Story of the Amulet. They will make the important discovery that not everything in a good book is necessarily Good. And it is undeniable that Nesbit’s books are very, very good. They would not have survived this long otherwise. To any who have not yet had the joy of E. Nesbit: there’s some really cool books on the shelf that you have to read—right now!

Rebekah Curtis is co-author of LadyLike (Concordia, 2015). Her writing has appeared in magazines including Chronicles, Touchstone, and Modern Reformation; and online at First Things, The Federalist, The Imaginative Conservative, and Front Porch Republic.