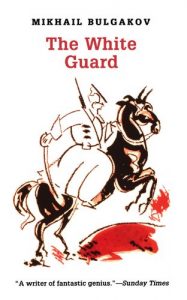 Seldom does one encounter a novel which offers such insight into today’s events. This is particularly true when the novel is based on events that happened over a century ago.

Mikhail Bulgakov was a Russian author who was born in Kiev in 1891. Trained as a doctor, he served as a medical officer with the White Russian forces against the Bolsheviks in the civil war which followed World War I. His first novel, “The White Guard”, was based on these experiences and was written in 1925. (It was not published, however, in the Soviet Union in book form until 1966.)

The story takes place over several months in the winter of 1918-1919 in Kiev. As it begins, the city is under siege by Ukrainian Nationalists led by a shadowy character of indeterminate background, Symon Petlyura. The city was still occupied at that point by German troops after the Russian surrender in 1917, although its nominal rulers were a puppet regime of former Czarist officers installed by the Germans.

The plot focuses on an upper-class family who were supporters of the just murdered Czar. The family consists of Alexei Turbin, a 25-year-old doctor who is the author’s stand-in, Elena Turbin, Alexei’s 24-year-old sister, and Nikolai Turbin, Alexei’s 17-year-old brother (Elena and Nikolai are based on Bulgakov’s actual siblings).

The Turbin family’s background is explained by evoking the polyglot character of Kiev, an amalgam of Eastern European peoples, including Ukrainians, Russians, Poles, Hungarians, and Jews. The Turbins are part of the ethnically Russian local ruling class, i.e. university educated professionals and intellectuals. They are understandably fearful about the cataclysm which is about to engulf and destroy their world. Bulgakov also captures the look and feel of the city and its surrounding countryside in midwinter. This is the backdrop against which the characters end up fighting for their lives after previously living a comfortable bourgeoisie existence.

The sense of menace and unease begins, however, in the very opening pages of the novel. Events are foreshadowed throughout by ominous gunfire, heard in the distance, but drawing ever closer to the Turbins’ home. In an almost Kafkaesque turn, each careful step they take to ensure their survival only worsens their predicament.

It slowly but ineluctably dawns on the Turbins and their circle of friends that their leaders will betray them. The Germans and their local quislings abandon the city. It was a display of cowardice and treachery that should be familiar to anyone who lived in any American city that was pillaged and burned in the summer of 2020, including my hometown of Kansas City.

The only inklings the Turbins and the other inhabitants of Kiev have of their fate are outlandish rumors about Petlyura and his Nationalists menacing Kiev. One is that Petlyura is a Romanov Grand Duke in disguise (kind of like “the U.S. military has seized Dominion servers in Germany”). Petlyura’s army is actually driven by an uprising of the Ukrainian peasantry, who had long chafed at Russian control of the Ukraine but who are equally provoked by the heavy-handed German occupiers.

Petlyura’s Nationalists also strongly identify as Socialists and thus despise the local gentry for class hatred reasons, as well as ethnic hostility. Above all they are anti-semitic, threatening a pogrom for all the Jews in the Ukraine. The novel begins, significantly, with the murder of a young Jewish father by Petlyura’s troops. It ends with a Jew being beaten to death as his army retreats from Kiev. It is no wonder the current Ukrainian regime banned distribution of the film version of The White Guard in 2014.

The furies of ethnic hatred and nationalism that convulsed the Ukraine in 1918 are at work now. The murderous horde of Petlyura was marching under the same blue and yellow banner that is now seen on emojis and suburban flag poles in the U.S.

When Mikhail Bulgakov wrote a century ago, he caught the beauty and pathos of a time, place, and people. I do not think he would be too surprised to see the same tragedy enacted yet again. Anyone who loves fiction and wants to understand today’s crisis would do well to read The White Guard.

Dwight Sutherland, Jr. is a retired lawyer living in Shawnee Mission, Kansas. He received his BA in Classics from Princeton University in 1974 and a J.D. from the University of Kansas School of Law in 1977.