Theroux and the Pleasure of Reading 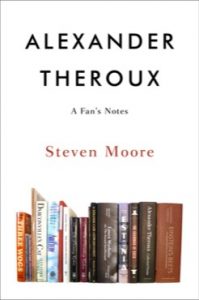 Writing about a writer writing about another writer … Does this create the potential for an infinite regress? Perhaps. With such a risk in mind, I would like to share some thoughts about Steven Moore’s recent book, Alexander Theroux: A Fan’s Notes. It is not only an excellent primer for all who wish to become acquainted with Alexander Theroux, that wonderful, cantankerous, brilliant writer of four novels (two nominated for the National Book Award), as well as short stories, fables, plays, poetry, travel writing, hundreds of essays on various topics, and several enormous books about strange facts (and you all should so desire to become acquainted; as Moore himself writes in his introduction, “that [Theroux] still needs to be introduced to most readers at this late date, nearly [fifty] years after the publication of his first book, is of course an outrage, but we burn daylight to grumble at the neglect”). The book is also a model, I believe, in literary criticism.

But let me begin with a couple of admissions. I am not a literary critic. Nor am I a literary scholar. So what, or who, am I? I am merely one of those most despised of creatures—the lawyer—who exists within that most unliterary of professions: the law. So in one sense, I stand firmly outside the world of the literary critic and scholar. And so I am in no position to critique them, right? But then again, maybe not. Because apart from being a lawyer, I am also a simple reader of books. Thus, perhaps, I am—or at least should be—at the center of the literary world. That center being the lowly reading public (assuming, of course, there still exists a reading public; the statistics are not particularly inspiring at the moment).

Why is the lowly reading public the center of the literary world, and not the esteemed critic or scholar? Because, I suspect (but have not proved) that writers do not write for literary critics. Nor do they write for literary scholars (or if they do, they are writing such drivel that we ought not concern ourselves with it anyways). Rather, if they write for anyone other than themselves (and I have it on good word that some do not), then I suspect they write for that proletarian class of folks known as the lowly reading public. I suspect this is true even of Theroux, who in an interview with Moore calls himself “too opinionated, literate, and unconventional to enjoy a widespread attention,” and wonders if there are perhaps “only 2400 people in the world worth writing for.” But if that is true, I suspect that Theroux would prefer those 2,400 people to be working class stiffs from Dorchester rather than literary scholars and critics from Bedford. Just a hunch.

This is why I love A Fan’s Notes so much. Even though Moore is a well-established critic (his book My Back Pages, also published by Zerogram Press, collects hundreds of his reviews of authors such as Barth, Pynchon, and Gaddis), as well as an award-winning scholar (perhaps best known for his massive two volume series The Novel: An Alternative History), he approaches Theroux as we all should: as first and foremost a fan. He writes as a lover of books and as a searcher who has discovered a treasure that he wishes to share. Moore’s fandom is beautifully rendered in the opening lines of his introduction:

I must confess at the outset that I love Alexander Theroux’s work as I love no other. I had never heard of him prior to seeing an ad for Darconville’s Cat in Publisher’s Weekly, but during that intriguing series of ads—three corner ads on succeeding pages culminating in a full-page one—I experienced something akin to love at first sight. That ad appeared in January of 1981, and since the novel was not scheduled to appear until May 1, I beguiled the time by searching out and reading the two other books of his that were still in print, Three Wogs and the children’s fable Master Snickup’s Cloak. These I enjoyed, confirming my instinct that I had found an author after my own heart. Then Darconville’s Cat arrived, dark and elegant, and swept me off my feet. This is the novel I had been waiting for all my life, I realized, nor have the succeeding decades dimmed my ardor. I want to be buried with this novel clasped to my heart.

Moore then wrote Theroux a fan letter, expressing his admiration for the book and asking that he sign it and his earlier works. Thus began a correspondence that has lasted for decades, even though Moore and Theroux only met once in person.

What reader of tales cannot relate to Moore’s experience? Tastes being quite individual, what appeals to one person may not appeal to another. But if you love books, I guarantee you have experienced what Moore experienced: being swept off your feet by a book, or a writer. The words on the page become sparkling and sizzling, appearing magical almost. The story comes alive. A sort of friendship, even if you never meet the writer, develops between you and him or her. Who can say how many times this will happen in one’s lifetime? But when it does, it is to be treasured.

And it is this experience, I suggest, that is at the heart of the pleasure of reading. It is this experience that makes the lowly reading public read and continue to read. To be captivated. To be pulled in. To be drawn into a vision. To contemplate and experience what it means to be human. I cannot say whether this still happens for the literary critic or scholar. But if it does not, then perhaps one must ask: why be one?

Although Moore is unquestionably a fan and an admirer of Theroux, he is also an honest and unflinching friend (and critic), claiming, rightly I think, that his book is both “a personal and impersonal evaluation of Theroux’s multifarious oeuvre.” And as a friend and critic, he’s unafraid to share when and where he believes Theroux’s oeuvre is not so stellar. For example, Moore suggests that Theroux’s early brilliance was muffled in some of his later work such as Laura Warholic, and also claims that he “turned out to be more of a mainstream literary all-rounder” like Norman Mailer or (don’t say it!) John Updike, rather than a “recruit to the U.S. fiction vanguard of the time” along the lines of Barth, Barthelme, Gaddis, and Gass. But then again, Moore suggests that Theroux’s grouping with these postmodernists was always “awkward” given the “underlying conservatism in his work and his preference for linear storytelling.” Moore also questions why Theroux has spent so much of his later years gathering material and writing massive books about curious facts (such as Einstein’s Beets and two books about colors), noting that these works are “my least-favorite side of Theroux’s multifaceted output.” But through it all, Moore’s love and admiration for Theroux comes through.

Hopefully, Moore’s love and admiration for Theroux sparks others’ love and admiration. I know it has for me. And now would be a good time to “discover” Theroux, because after nearly fifteen years of fictional silence, Tough Poets Press has recently published a collection of early short stories, a collection of fables, and a forthcoming second collection of later stories. Sure, Darconville’s Cat, Theroux’s unquestioned masterpiece which contains “words that haven’t been uttered in 400 years,” according to the advertisement that first struck Moore, is still impossible to find for less than $249.98. But eventually NYRB Classics will re-publish it, right? Maybe, just maybe, Moore’s book will help bring about just that. Or maybe Moore’s book will spark Theroux to finally finish that fascinating and “ambitious novel,” Herbert Head: Biography of a Poet, that Theroux has been “working on for years.” Either result would be a welcome accomplishment.

​​Jeffrey Wald writes from the Twin Cities. His writing has appeared in publications such as Dappled Things, The University Bookman, Genealogies of Modernity, and Front Porch Republic.