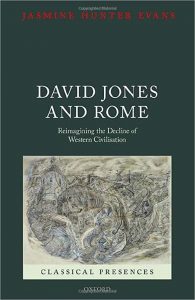 In 1964, poet-painter David Jones lamented changes underway in the Roman Catholic Church in distinctive, and telling, terms: “It’s a terrible thought that the language of the West, of the Western liturgy, and inevitably the Roman chant, might become virtually extinct.… At root, I don’t believe it’s a ‘religious’ matter at all. I believe it’s only part of the Decline of the West.”

As Jasmine Hunter Evans demonstrates in this impressive study, Jones’s medley was informed by a lifelong attentiveness to ancient Rome’s cultural and spiritual legacy and a sense of its history as an analog of his own “civilization-phase.” “Rome” was a multivalent mythos that helped guide Jones’s musings on recurrent themes, particularly the nature of imperialism, theories of history popularized by Oswald Spengler’s The Decline of the West, the cultural role of the Catholic Church, and the fate of his paternal homeland, Wales. In each instance, “the idea of Rome” symbolized ominous warnings of civilizational degradation, but also signaled, especially in its religious dimension, hopes for cultural renewal.

Hunter Evans points out that comparisons to Rome were ubiquitous in several early twentieth century discourses, but that the poet’s participation in them was “unmistakably Jonesian.” For example, as politicians and public intellectuals in sundry lands invoked the imprimatur of the Roman Empire on their own imperial policies to promote patriotism, Jones sought subversively to censure, rather than celebrate, Rome’s self-proclaimed heirs. Jones was a consistent opponent of imperialism as a streamlining destroyer of local cultural diversity and identity; he therefore employed Roman imagery to decry fascist and British capitalist appropriators of Rome’s imperial legacy (despite some temporary attraction to the former) while further condemning communist expansionism under this rubric. Indeed “Rome” became a metanyomic crystallization of what he considered the empire’s exploitative essence.

Yet Jones’s use of this trope was also shaped by his Catholicism. He likened an empire to the Passion narrative’s “bad” thief, arguing that even this “truculent robber…somehow or other he is ‘redeemed’ too!”  Jones’s depiction of that salvation relied on another Roman parallel.  Believing that imperial Rome had been the womb from which Christendom had sprung, he felt that his day’s secularist empires could similarly foster a new Catholic order. After describing Christianity’s rise in the final Roman years and its growth to its Gothic height in The Anathemata, Jones ponders its possible present-day revival and contests the claim that his epoch is irreversibly post-Christian:

in the times of forgetting?

in the loops between?

and after the happy falls?

In his symbology, then, Rome was “ravager of folds, redeemed and fold-keeper.”

This late imperial referent discloses Jones’s involvement in an additional common rendering of Rome as a paradigm of cultural decline.  His principal focal point for this discussion was the works of Oswald Spengler. Although The Decline of the West was read widely in early twentieth century Britain, Jones was “completely saturated” in it (and in Spengler’s other writings); in 1951, the BBC even solicited a lecture on “old Ossey.” Jones’s own sense of social degeneration rested on a conviction that, uniquely in history, the industrial era was governed by “the utile,” which valorized functional efficiency at the expense of what he styled the defining human traits of “gratuitous” craftsmanship and sacrament. He conjoined this distinction with Spengler’s polarity between a “culture” animated by “truth men” and a “civilization” dominated by “fact men” to situate his “Break” in a specific discourse of decline, one that molded his poetic portraits of Roman society, though his Catholicism led him to challenge key facets of Spengler’s metahistory.

In particular, Spengler saw the historical dynamic as cyclical. Societies adhered to a pattern of cultural growth and maturity, succeeded by decay into civilizational decline and collapse, with ensuing cultural recovery and an infinite repetition of this process. Jones, however, (following his close friend Christopher Dawson) upheld an Augustinian model of history as linear, with the Incarnation as the node to which all prior time had inclined and the eschaton as the goal toward which the post-Ascension world was moving providentially. Spengler’s standpoint is thus fundamentally fatalistic, while Jones’s is driven by the theological virtue of hope. In “The Tribune’s Visitation,” the eponymous Roman protagonist is Jones’s “most Spenglerian character,” as he “serves contemporary fact” and uses Pauline language to proclaim an anti-Gospel of fate—

for all are members

of the Strider’s body.

And if not of one hope

then of one necessity—

even as the poet professed his own “‘optimism’ of the Saints”:

In some moods those repeated words of Turpin in the Song

‘Sirs, you are set for sorrow,’ would seem to be our

heard with our ears and our fathers have told us the

marvels done in their

time and in pre-history, so that, one way or another, Deus

may have for us another than its usual connotation. From

the strayed machine-men may create a myth patient of

In what each author deemed a dark time, Jones judged Spengler and his kind content to curse the darkness while he and other orthodox Christians (almost literally) lit candles:

grey is rain, but

Consequently, the Church’s destiny in his era was a matter of acute concern. Jones converted to Catholicism in 1921, in part because the faith traveled on the “via Romana:” “only by becoming a Catholic can one establish continuity with Antiquity.” He thus held that Roman Catholicism was a singular conserver of many elements of classical culture, most tangibly in its liturgy, which he dubbed the “direct oral and aural and sacral link with the whole past, with the rise of our religion in the Greco-Roman world of the late Roman world, just as the vestments of the sacred ministers afforded a visual and visible continuity with that world.”

He therefore distrusted mid-century ritual alterations, especially the vernacularization of the Mass, as a “utile and so-called ‘practical'” assault on “Latin and all that obscures.… [E]verything specifically Roman & Western is under attack, from the Latin of the Mass to Scholastic philosophy, theology, even to the sacring bell.” In the poet’s mind, the Church hence risked abetting cultural decline, as implicitly positivist prelates were “throwing away a whole heritage.” Yet he did not find these forces irresistible. He took “a little comfort” from the permission some parishes received to retain the traditional rites, and made repeated public pleas on their behalf that appealed hopefully to their significance as a “liaison with the formative…religion-culture of the entire West…which, incidentally leads us back to that world of Antiquity.”

Jones judged Wales a similarly crucial and precarious ambassador to the ancient world. Primarily loyal to his father’s people since childhood, the poet used Rome in his art as a proxy for English imperial aggression in Wales while also casting Wales as the United Kingdom’s sole complete repository of its Roman bequest, and thus its irreplaceable link to the larger Western classical and Christian legacy. Conceiving Wales as this exclusive “direct, living, unbroken, series of links with Antiquity,” he echoed his disquiet about the Roman liturgy, fearing that the Welsh language and culture (and the landscape that embedded them) were imperiled by the hegemony of “the placeless cosmopolis of the technocrats.” Such misgivings were shared by many fellow backers of the nationalist party, Plaid Cymru, but Jones’s ultimate hopes for Wales assumed a less partisan form. As Wales preserved the heritage of not just itself, but of all Britain, he thought, this “complex dapple” made it impossible and undesirable for the Cymry to detach themselves from the other peoples of the British Isles; he therefore declared that he was not a “100% Welsh Nationalist.”

In fact (as his rhetoric intimates), Jones wished to safeguard Wales’s “sacred heritage” through another aspect of its Roman patrimony. He claimed that the Cymry had been “signed with the Cross from their very beginnings” due to their initial rule by the Christian Roman Empire. Aware of the powerful factors behind Nonconformity’s later growth in Wales, Jones nonetheless insisted that the kind of Christianity most suitable to Wales remained the one he considered continuous with its Roman roots: “the more Welsh the numen is, so much the more will there be found to be Catholic affinities.” In short, it was “the Mother of Churches” that was best equipped to protect modern Wales and nurture its ancestral inheritance as a cornerstone of cultural revival: “the Old Religion should be seen as a thing having had long affinity with the real past of the real Wales; seen as a returning thing, as a returned native and as something which can direct rather than frustrate the hiraeth of the Cymry.”

Jones’s friend (and Welsh nationalist compatriot) Saunders Lewis once characterized the poet as “agonizingly an artist of his time.” As Jones struggled with his “technolatrous” age, he took ancient Rome as a lodestar for navigating “this distressful epoch.” Viewing Roman history as a mirror of modernity articulated dread of imperialism, civilizational decline, and religious and cultural erasure. But the artist also saw reflected paths of resistance and renewal along the via Romana, particularly in the pontifex that crossed the Tiber. In that envisioning of the eternal city, empires could be redeemed, hope and history could rhyme, and Church and patria could reawaken pietas. In the end, David Jones deduced, this stereoscopic yet hopeful vision made one insight pellucidly clear: “one never gets rid of these Roman things.”

Adam Schwartz is author of The Third Spring: G. K. Chesterton, Graham Greene, Christopher Dawson, and David Jones (The Catholic University of America Press, 2005). A professor of history at Christendom College, he serves on the advisory board of the David Jones Research Center.