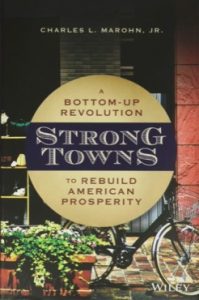 Strong Towns: A Bottom-Up Revolution to Rebuild American Prosperity is an amazing achievement by Charles L. Marohn Jr. If nothing else, it’s astonishing that he was able to make municipal finance interesting.

Marohn, a civil engineer from Minnesota, is the founder of Strong Towns, an organization that seeks to get people interested in the financial health of their town.

According to Marohn, the United States has been building cities and towns in a way that actually destroys wealth since the end of World War II. To save on short-term expenditures, cities have allowed private developers to build infrastructure and new homes, businesses, and industrial parks all at once. Then they turn it over to the city, which gets about thirty years of not needing to pay for it, plus the taxes. But the infrastructure is overbuilt, so the maintenance obligations exceed the tax revenue the homes and businesses produce.

However, the city can get the money to support some of the old neighborhoods from newly developed ones, which they don’t need to pay for yet. Then they need more development to pay for the newer ones and so on ad infinitum. Marohn calls it the Growth Ponzi Scheme: growth doesn’t build wealth, it’s necessary just to maintain what exists.

“The tragic reversal comes from the realization that growth once served us, but now we serve growth,” Marohn writes. “The constraint of modern America is that we must experience annual growth in our economy. Without growth, we can’t service our debts, pay our retirements and pensions, and keep up with the rising costs of healthcare and education.”

Growth that results in liabilities outpacing revenue creates the illusion of wealth, but it actually makes us poorer.

Nearly every American city now practices this kind of development, which Marohn argues is a brewing crisis that will force tax increases and service cuts, probably encouraging people to relocate. This will kill small towns. Cities caught in this negative feedback loop are among the most dysfunctional places in the country—Marohn points out that fifty years ago, Ferguson, Missouri, was a prosperous suburb of Saint Louis, but its liabilities eclipsed its growth, so many services declined in quality—except for the police department, whose pensions were protected from the fiscal crisis. To raise revenue, the city came to rely on the police enforcing fines on the residents, contributing to an atmosphere of mistrust and conflict that resulted in the death of Michael Brown Jr.

Ferguson is an extreme example of what the Growth Ponzi Scheme has wrought. A far more common story of its consequences involve big box stores. Cities often aggressively court these stores with subsidies and by expanding roads and water systems. Ostensibly intended to create jobs, these cities rarely have income taxes, limiting the amount they can recoup from the subsidies, while the new business only has few ties to the town, never using local businesses. In fact, some local stores may be put out of business by the big box store’s subsidy-enabled lower prices (Amazon, of course, works much the same way). Not only has the town now spent money destroying its economy, but the big box stores frequently leave as soon as the subsidies expire.

While the effects of chains on smaller towns are well-known, as is the role of subsidies in the race to the bottom, Marohn is able to provide a much deeper analysis. He tells of two old blocks in his hometown. Both were designated blighted. One block was demolished and replaced with a fast food franchise. It was everything today’s paradigm says should be valuable growth. But the brand new building was only worth $620,000, while the businesses in the old block were collectively worth $1.1 million. “In terms of community wealth, the Old and Blighted block is 77% greater than the Shiny and New. The old block generates 77% more property tax than the new. Despite outward appearances, the Old and Blighted is far more financially productive, even though it costs the community the same to service.”

The businesses in the old block were owned by people from the town, using local accountants and attorneys, contracting to local print shops, and advertising in local publications. Not so with the fast food franchise, which, to add insult to injury, wasn’t a new franchise. It had moved three blocks up from its old building, which sat empty for years, while it got twenty-six years of tax-increment financing for the move.

This leads into the idea of value per acre, which can get large with individual businesses. The town of High Point, North Carolina, has a Walmart and a Kmart and a tiny, one-story building with a window and a front door that is home to Jimmy’s Pizza. Perhaps not more than twenty feet wide and one hundred feet deep, Jimmy’s Pizza has a value per acre of about $3.5 million, much more than either retailer. One of the few failings of the book is that Marohn doesn’t explain why Jimmy’s Pizza is so much more valuable and, more importantly, why city and town officials have gone so long without comprehending how the developments they’ve been pushing for have been making their communities poorer all this time. There are answers, but they may be obscure. In the second case, city leaders are trained to look at development in terms of what’s new and what’s “blighted,” what businesses are worth and not whether they make the most of their space. It did work once—it wasn’t that long ago that malls were new and full of customers, while city coffers were full. It still does work in some places.

In the first case, this is a value-per-acre measurement. Jimmy’s Pizza is so valuable because it occupies a tiny building that probably fills its entire lot. Assuming it’s 2000 square feet, it covers 0.046 acres and so its total value is $161,000. A Walmart is still worth more, comparing businesses, but most of the Walmart is a parking lot. There was only one Sam Walton, but nearly every city in America can produce a Jimmy. Most can produce more than one.

And that’s part of Marohn’s point: the resources our towns invest in attracting one Walmart can be better spent supporting dozens of Jimmys. Not all of them will be successful, but “The strategy is to diversify the small bets in the hopes of landing a few that provide that huge gain.”

The neighborhoods that are most resilient, that provide the most opportunity for the Jimmys of the world and require maintenance rather than expensive new investment, are also the most walkable. He can walk to work, walk to the grocery store, or just walk for relaxation. His daughters can walk or ride their bikes to a nearby park or their school without him fearing for their lives and he has gotten to know many of his neighbors simply from being out and around so much, something that didn’t happen when his family lived in a cul-de-sac.

In the book’s introduction, Marohn writes about a small house he saw in Pompeii. It had two rooms: in the front, the owners operated a food stall, while the back room was for living. The house was also part of a row of similar houses, built with common walls, all with some kind of shop in front. When he first saw it, he thought of it as a primitive way of living, but now he recognizes the wisdom in it: the neighbors share the maintenance of their common walls and can keep an eye on each other’s shops and kids; building the shop into the house means that food preparation and selling duties can be combined with child-rearing. Maybe a grandparent lived with the family as well and helped out. Older children could go out and earn money in the city or the fields surrounding it, returning to the family home at night. Not only would they save on the cost (and collapse risk) of renting an apartment, the multiple income streams meant that they would be more likely to survive a downturn in the tourist trade or a bad year in the fields.

In contrast, “The only common cultural practice consistently reinforced by the structure of the places we’ve built today is consumption.… Human habitat evolved to assist us in becoming a better member of the community, to nudge humans along a path of virtue. This goal is completely absent in modern conversations about building cities.”

Strong Towns suggests that the built environment of our cities and towns is responsible for some of our social and political woes, not any particular basket of policies proposed by one party or another. We have economic growth, but are getting poorer. As we get poorer, more and more people are uprooted from their families and communities, crowding into apartments in the few successful places in the hopes of getting one of those elusive jobs that might keep up with the rent increases. With families dispersed and communities disrupted, the safety nets they provided shut down, leaving people lost, while high home prices and rents, as well as a lack of places that support community, prevent them from forming new families or communities. The lost people gravitate towards other sources of meaning: drugs, alcohol, extreme politics, pornography, conspiracy theories, pure apathy, and so on. And there we have it: not “liberalism” or “wealth inequality” or “free trade” or “critical race theory” or “late capitalism” or whatever today’s enemy is supposed to be. Our places have not been built for humans, but the mythical homo oeconomicus.

Strong Towns is not a perfect book. Much of what I have just written is from reading between the lines. Marohn seems to shy away from outright stating some of these ideas. Other parts of the book are written in a kind of shorthand. The parts on Ferguson, for example, are written in a way that expects the reader to be familiar with other articles detailing its use of fines to fund itself, and some parts seem to have become “detached” from more natural locations. The discussion of Jimmy’s Pizza and its value, for instance, is in Chapter Eight, while the part about the old and blighted block versus the brand new fast food restaurant, is thirty pages prior in the previous chapter.

But these qualifications are of no consequence—this is the most important book published in my lifetime. If you really want to learn something, read Jane Jacobs’s Dark Age Ahead and Niall Ferguson’s The Great Degeneration first. But definitely read Strong Towns and then convince everyone you know to read it.