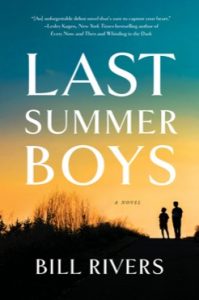 Nostalgia is a word often used in reference to works of fiction like Ray Bradbury’s Dandelion Wine and Stephen King’s novella “The Body,” which was made into the 1986 film Stand by Me. Last Summer Boys, a debut novel by Bill Rivers, has been compared to such stories. But in what ways is this June 2022 release a call to “return home”? Interestingly, Rivers is not old enough to be writing from a place of genuine nostalgia (at least, I’m fairly certain he wasn’t alive in 1968!), and his novel is likely better for it. Instead of pining for a lost youth, Rivers achieves an often-overlooked feat that is vital, in particular, to novels with a historical setting. Last Summer Boys immerses the reader in a vibrant and complex world that feels real not only because it captures a moment in time, but because it captures what it was about that moment that made it timeless.

The story opens during the volatile summer of 1968. Rev. Dr. Martin Luther King Jr. and Robert F. Kennedy have been assassinated, and thirteen-year-old Jack Elliot is trying to find a way to keep his almost-eighteen-year-old brother, Pete, from the draft that will take him across the world to Vietnam. With the help of his visiting cousin, Frankie, a book-smart boy fleeing the city for a summer spent in the Elliots’ small Pennsylvania town, Jack devises a plan to save Pete by turning him into a celebrity, because everyone knows that “If you’re famous, you don’t have to go to war.”

Adventures ensue, and they will whisk away anyone who practically lived outdoors during the summers of their childhood. Yet Last Summer Boys is about a lot more than chasing fireflies and catching bullfrogs, as important as such “timeless moments” in the dusk of youth may be. Unlike many coming-of-age novels where adolescents either venture into a magical realm or create their own subculture that is cut off from the adults around them, Rivers’s story is firmly rooted in a world that is both multi-generational and fully real—without sacrificing any of the freedom or wonder we often associate with those final, fleeting summers on the edge of imminent adulthood. Jack, his older brothers, and cousin Frankie do not live in their own adolescent paradise (or dystopia) where elders no longer exist (an element of many Young Adult novels featuring protagonists around the same age, and likely one of the reasons Last Summer Boys is General Fiction, not YA). Every adventure the boys have is tied to larger events—not so much the political events they watch unfolding on the evening news, but the events taking place in their own town and among the people with whom they share their burgeoning lives.

These moments where the boys find themselves inside a drama that is larger than themselves—even as that drama remains firmly local—is where the novel begins to feel like a living, breathing witness to Russell Kirk’s understanding of the moral imagination and the Permanent Things. Rivers’s insights, well-crafted and subtle as they may be, aren’t surprising, given that the author notes in his Acknowledgements that he spent a summer working on his book in the “haunting” Mecosta library of the Russell Kirk Center. Although Dr. Kirk mainly wrote ghost stories and fiction of the Gothic variety—which Last Summer Boys is not—Bill Rivers’s novel does for rural Pennsylvania what Kirk’s stories did for settings like rural Michigan and the wilds of Scotland. It makes these “backwaters” places where the most colorful of characters can emerge as fully alive and flawed human beings. Ultimately, this paradox of “outcasts who belong” is what moves the plot forward. It is the eccentricities of such secondary characters, born of particular places in a particular time, that alter the fate of their neighbors in the face of mass development driven by greed, the growing presence of the media, and the increasing conformity that results from both. Rivers, like Kirk, makes for “his readers one of those places in the world where the cooperation of natural beauty, human art, and a deep sense of the past have created an environment specially conducive to wonder and contemplation.”

Rivers has done his research and the results will surely make the summer of 1968 come alive in ways that cause those who lived through it to nod with recognition. Yet for those of us who didn’t, the novel never evokes the sense that this “simpler time” was preferable to the present due to the political climate of the age, or because the smartphone did not exist, or because children played in ponds and rivers unsupervised, but rather because neighbors genuinely knew one another. They also knew that their destinies were inextricably linked, like it or not. Jack and his family belong to the Apple Creek, and they belong to “the Stairways,” their ancestral property. They belong, period—to each other and to an even greater mystery, one that forges “an eternal chain of right and duty which links great and obscure, living and dead.”

Pete, the eldest Elliot boy, acknowledges this enduring connection when he tells his brother, “You’ve always been a fixer, Jack. But sometimes you have to let things go. Let them be. Maybe they get broken. Maybe they don’t. But you don’t have to worry, because nothing stays broken forever. Nothing’s permanently lost.… People are the least killable things there are. They have a piece of forever in them. And nothing can take that away.”

It is this timeless theme that reminds us that the god of extreme individualism running rampant on both sides of the ideological aisle and in every arena of our culture is a contemporary idol rather than a Permanent Thing, a distortion of the liberty for (in contrast to “the freedom from”) that is so central to the American tradition and spirit. So read Last Summer Boys if you want to be transported to a time when mischievous children were allowed to roam the woods wild and free, but know that the “home” this story is calling us back to transcends even “the good old days.”

Ashlee Cowles is a former Russell Kirk Center Wilbur Fellow and the author of the novels Beneath Wandering Stars, The Poppy and the Rose, and, as A. D. Rhine, the forthcoming historical epic Horses of Fire (Penguin Random House, 2023).