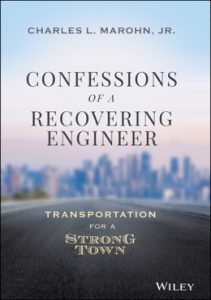 On the evening of December 3, 2014, seven-year-old Destiny Gonzalez was hit by a drunk driver on State Street in downtown Springfield, MA, next to the public library. She was taken to the hospital, where she died of her injuries. Most observers would blame the drunk driver for Destiny’s death; others might add that Destiny and her mother should not have attempted to cross State Street where there was no crosswalk. In Confessions of a Recovering Engineer, Charles “Chuck” Marohn, the director of the Strong Towns organization, asks us to consider a third factor: the culpability of the engineers who designed State Street.

Even though State Street runs through the center of Springfield, an area with heavy pedestrian traffic, it is designed like a highway to accommodate large volumes of traffic traveling at high speeds. Concerns about safety, especially the safety of pedestrians, are an afterthought in comparison to the core engineering values of traffic speed and volume. In order to cross the street legally that December night, Destiny Gonzalez would have had to walk—in the rain, no less—approximately the length of a football field after leaving the library to get to a traffic signal with a crosswalk, and then walk another football field’s length to get back to her family’s car. In other words, State Street’s design gives pedestrians incentives to cross at illegal points. It also induces drivers to speed because it provides many cues (like wide lanes and gentle grades) that communicate to them that it is safe to do so. These incentives are deadly in combination.

North America is full of State Streets, and Marohn, himself a licensed engineer, blames the engineering profession. According to him, engineers operate with a set of embedded values and biases that are usually unacknowledged. They propose projects and plans informed by these values and biases to local officials, whose priorities are usually different from the engineers’, but who lack the information or awareness to challenge them. The biases are present even in the language that engineers use. For example, a project to widen an urban street is invariably described as an “improvement” that will increase the street’s “level of service,” even if the net result of the project will be to diminish pedestrian safety or decrease the economic activity actually taking place on the street. (I recently saw Marohn’s characterization confirmed at a public meeting in my own city.) Marohn writes that these biases might have served a useful function during the first great era of highway construction following World War II, but that they now cause great harm in city after city.

Marohn argues that elected officials, urban planners, and engineers need to recover the clear distinction between roads and streets. The purpose of roads is to move traffic quickly and safely from place to place; by contrast, urban streets are “platforms for building wealth” in a community: homes, churches, businesses, public buildings, parks, and the like. When planners attempt to get both things at once, the result is a “stroad” that performs neither task well. Most of us living in suburbia can immediately think of roads on the outskirts of our towns that used to facilitate quick travel times, but that now are full of traffic signals, slow speeds, and dangerous turning situations despite their posted speed limits of 40 mph or higher. The flipside of this phenomenon is historic streets in urban cores that have been redesigned to road standards in the dangerous way experienced so tragically by Destiny Gonzalez.

According to Marohn, elected officials must decide which of their stroads ought to be roads and which ones ought to be streets. Then they can begin taking steps to redesign them accordingly. Turning stroads into roads is straightforward, in part because nearly every stroad is already engineered to roadway standards. Turning them into streets requires greater thought and a willingness to revise engineering manuals and standards that privilege the maximization of speed and traffic flow.

One challenge confronting local officials interested in transportation reform of this kind is the unhealthy way Americans finance most of their infrastructure. A significant portion of the street maintenance budget in most cities and towns comes from the state or the federal government. These funds are tied to specific streets and intersections and come with many strings attached. Marohn uses a telling example: the street where he lives in a quiet neighborhood adjacent to downtown Brainerd, Minnesota. Even though it accommodates fewer than 500 cars per day, it must be built to near-highway standards because it is designated as a state-aid road, part of an “integrated network” that runs through the city: “It has wide lanes, broad recovery areas, limited parking, speeds above levels safe for neighborhoods, and few stops. My family and I live on a mini highway [sic], solely because of the way the United States funds transportation.” Local officials, who would like to redesign the street in a rational way, feel constrained not to do so because then they would have to give up state funding that they consider vital for its maintenance.

Confessions of a Recovering Engineer’s most provocative chapter is probably Chapter 11, “The Routine Traffic Stop.” Here Marohn explains how road and street design in our cities creates a situation where a high percentage of drivers break traffic laws and ordinances on a regular basis in ways that do not endanger public safety. Enforcement of these laws and ordinances thus becomes discretionary on the part of police, who could not possibly respond to every infraction. As a result, the routine traffic stop has become a pretext for “fishing” for evidence of some misdemeanor or crime the police officer considers more serious.

When nearly everyone is guilty, and enforcement is discretionary or even arbitrary, the potential for abuse abounds. Police inevitably decide which drivers to stop on the basis of profiling. After the highly publicized shooting of Philando Castile in 2016, it was revealed that the 32-year-old Castile had previously been pulled over forty-nine times, but had rarely received a ticket, even though he was technically guilty of something every time he was pulled over. The pretext for the stop that resulted in Castile’s death was a faulty tail light; the real reason for the stop was that he had been profiled as a robbery suspect. (He had not committed the robbery.) Marohn argues that, in this roundabout way, our transportation design helps stoke racial resentment and even civil unrest. His reform proposal is twofold. First, change the design of our roads and streets to eliminate the incentives for drivers to break traffic laws. Second, end the routine investigatory traffic stop; ticket minor infractions electronically or through the mail, and pull people over only when there is a real threat to public safety.

Marohn makes his case persuasively throughout the book. In addition to the topics discussed above, readers will find thought-provoking ideas about public transit, traffic congestion, technology fads, and prospective reform of professional associations. One of Marohn’s great strengths is his refusal to indulge in partisanship. Red meat for the extremes of the ideological spectrum is a proven way to sell books, but Marohn recognizes that transportation reform is or ought to be an issue that cuts across partisan lines at the local level. Conservatives will appreciate his insistence on attention to the bottom line and his appreciation of traditional urban design. Progressives will appreciate his sensitivity to questions of race and class.

The book’s flaws are mostly stylistic. The conversation Marohn recounts in the introduction to establish the disconnect between the engineering profession and the concerns of ordinary people is a pastiche drawn from actual exchanges he had during his time as a practicing engineer, but it still reads as contrived. (Marohn’s 2010 YouTube video that served as the basis for the introduction is more engaging.) In other chapters, Marohn needlessly reproduces lengthy quotations from his 2019 book Strong Towns when brief paraphrasing would suffice to make his point. Examples like these indicate shortcomings in the editing process; fortunately, they do not detract from the book’s overall argument.

Whether or not one agrees with all of Marohn’s proposals, Confessions of a Recovering Engineer opens readers’ eyes to many unhealthy realities of our transportation system. The prioritization of speed and flow over such other considerations as safety and cost has led to overbuilding and overengineering of infrastructure nearly everywhere. Most cities now cannot afford to maintain their networks without large infusions of state or federal aid. Worse, traffic fatalities—both of drivers and the pedestrians or cyclists they strike—far exceed what we should expect from a well-functioning system. One might argue the blame for this situation lies more properly with the elected officials who failed to guard the store over the years in the face of engineering’s biases rather than with, as Marohn argues, the engineering profession itself. Regardless, today’s local officials and concerned citizens now have a valuable resource in this book to help improve their cities and towns. For that, we should thank Chuck Marohn.

Jason Jewell chairs the Department of Humanities at Faulkner University, where he also directs the Center for Great Books and Human Flourishing. He was a Wilbur Scholar at the Russell Kirk Center for Cultural Renewal in the summer of 2019.