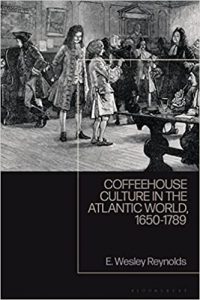 Near the end of his life, Thomas Jefferson famously referred to coffee as “the favorite drink of the civilized world.” The Sage of Monticello knew whereof he spoke.

Throughout the colonial era, enjoyment of the hot, bracing beverage over conversation in coffeehouses had become a distinctive fixture in American and British urban life. Within those aromatic rooms, the news of the day had been discussed, transatlantic mail had been processed, timely information related to shipping and commerce had been shared, and the latest books and dramas had been reviewed aloud. Also, political ideas had been debated and politicians had been lobbied, new ideas about proper manners and cosmopolitan discourse had come into being, on-site printing presses had published reviews and political broadsides, and (arguably) Anglo-American culture had been distinctively shaped. What Russell Kirk called “America’s British culture” was affirmed, as the goings-on in coffeehouses on both sides of the Atlantic were copied, drawing Britain and her American colonies close together in one sense, even as dark clouds gathered portending war between the two countries.

In his study Coffeehouse Culture in the Atlantic World, Wesley Reynolds illustrates the depth, breadth, and history of his topic in a well-written and convincing manner, tackling a subject that could be drab and pedantic in lesser hands while bringing to life a remarkable historical period. A history professor by trade, Reynolds combines a knack for research and writing into a compelling argument for the import of colonial America’s most overlooked grinder and filter of culture.

Early in his study, Mr. Reynolds introduces a recurrent term to describe the patrons of coffeehouses: “trifling,” and this term deserves clarification for it looms large in the author’s emphasis. In Southern culture, “trifling” is a term of contempt, an adjective used to describe an unambitious, lazy ne’er-do-well. There is some aspect of that in Mr. Reynolds’s use of the word; but for the most part, in the parlance of late seventeenth-century England and eighteenth-century North America, the word “trifling” describes a person who possesses a quality of mind that can move easily, lightly, and knowledgeably from one subject to another, who can speak intelligently and exhibit right decorum in the presence of listeners from any class or station, whether the topic is one of seriousness or frivolity.

Somewhat like John Henry Newman’s definition of a gentleman, the better sort of trifler “is never mean or little in his disputes, never takes unfair advantage, never mistakes personalities or sharp sayings for arguments, or insinuates evil which he dare not say out loud. From a long-sighted prudence, he observes the maxim of the ancient sage, that we should ever conduct ourselves towards our enemy as if he were one day to be our friend.” Under such circumstances, the practice of free expression and a free press was affirmed and strengthened, and a certain degree of class fluidity was effected.

Like dining clubs as described by Joseph Addison, coffeehouses were “founded upon Eating and Drinking, which are Points wherein most Men agree, and in which the Learned and Illiterate, the Dull and Airy, the philosopher and the Buffoon, can all of them bear a Part.” Not that they were places where only the well mannered gathered for honest give-and-take. Over time—as it is with all public gathering places—coffeehouses attracted their share of boors, brawlers, and dangerous troublemakers of every description.

And as news of injustices (real or perceived) by the Crown was discussed in North American coffeehouses and revolution approached, politicians, merchants, and the wealthy ceased frequenting gathering spots where they might likely be harangued, threatened, or even assaulted. Coffeehouses came to be given over to hot-blooded patrons, who had little interest in discussing anything but the politics of the hour, and who over time gravitated to other venues.

“Writers like Benjamin Franklin and Thomas Paine were masters of the cosmopolitan coffeehouse literary style of satire and used London’s metropolitan language of critique to undo the empire from the coffeehouse presses of Philadelphia,” Reynolds explains. “Revolution caught like wildfire because it was so suited to the urbanization which middling coffeehouse publics had nursed for the past half-century.”

For a time, then, coffeehouses exercised a crucial but (today) largely unremarked influence upon the fashioning of Anglo-American civilization. Mr. Reynolds’s fine book seeks to remedy that deficiency.

But time runs on, runs on, as Yeats wrote; and coffeehouses as places of fruitful discourse among a Dickensian gaggle of the great and the small are no more, replaced by cookie-cutter franchises selling overpriced, burnt-tasting hot beverages for consumption by grab-and-go customers.

The very sites upon which the colonial-era coffeeshops once stood—Bradford’s in London, the Atlantic Garden House in New York, the Exchange in Boston, and numerous others—are in many cases forgotten. It’s as Tolkien wrote in one of his stories: “The face of the land has changed since that time, and kingdoms have come and gone; woods have fallen, and rivers have shifted, and only the hills remain, and they are worn down by the rain and the wind.” Indeed, much of cultural value has been lost or neglected over the centuries. But thanks to Reynolds, old treasures such as coffeehouses are brought to light and seen again by appreciative eyes, and we are reminded that Western man has a history of which he should be justly proud.

James E. Person Jr. is a Senior Fellow at the Russell Kirk Center for Cultural Renewal and a longtime reviewer. He is the author of Russell Kirk: A Critical Biography of a Conservative Mind and the editor of Imaginative Conservatism: The Letters of Russell Kirk (University Press of Kentucky, 2018).