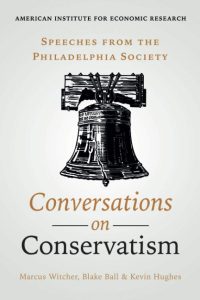 The Philadelphia Society. What can you say about an organization which took its name from a city, but had many of its most formative meetings in Chicago, and its headquarters in Michigan? Except, of course, it was not named for the city but for the ideas of ordered liberty which emanated from that city in the summer of 1787. It has been nearly sixty years since the founding of the Philadelphia Society, the brainchild of the late Donald Lipsett, and its growth and development over the years as an intellectual home for all conservatives who accepted the premise of ordered liberty is a testimony to the founders and those who have long carried on the legacy of the Society and its principles.

Philly Soc has been an important institution for the delineation and sharpening of conservative ideas. A collection of these essays and ideas in the form of panels at a variety of Philly Soc meetings has been put together by Marcus Witcher, Blake Ball and Kevin Hughes in Conversations on Conservatism, a selection of sessions and speeches on the theme of ordered liberty from 1965 to 1982. Like many books of this type, the selection is a bit uneven, and one wished for more of the controversial meetings to be featured rather than some of the selections included. No reason is given for the end date of 1982. The best moments of the Society in the Reagan era lay after that date, like in 1986 when Tonsor referred to the neoconservatives as “town whores” in a vituperative debate over the future of the movement in the Reagan era. Instead, we are given a bit of a dull overlap about the theme of ordered liberty featuring rather tiresome debates between traditionalists and libertarian-minded conservatives. Conversely, we are also given two paper sessions on the prospects of conservatism in the 1970s and the first two years of the Reagan administration, both of which are dated and esoteric. It is unclear why our editors chose those as examples of the debate on ordered liberty.

A better way to have framed the debates over time in the volume while keeping the theme of ordered liberty together, would have been to discuss the question of conservative identity. What is conservatism? Who is a conservative? A few of the sessions included in this volume speak precisely about this problem. One of them is a debate from a 1971 meeting called “Liberals and Conservatives Revisited” which featured Irving Kristol, Milton Friedman and Ernest Van den Haag. Kristol was wrestling with his identity in his talk, about the difficulties of accepting the labels liberal—as in classical liberal—or conservative as that was ill-defined to him. In the end, he settled for being a conservative liberal (of the new liberal variety) on his path to being labeled a neoconservative (a term coming to define Kristol and others in the 1970s). Friedman discussed the classical liberal model, arguing back to Kristol about his continued faith in government and even bureaucracy as an umpire. Both essays got to the heart of ordered liberty, but also exposed the continued protean character of the conservative movement.

Ditto the 1977 Chicago meeting where Stephen Tonsor welcomed neoconservatism into the conservative movement, calling the realignment of Jewish intellectuals like Kristol, Norman Podhoretz, and others “the single most important intellectual development at the present time.” He also dissuaded conservatives from falling prey to the populist elements on the Right. About a decade later, Tonsor would disassociate himself from the neocons in the meeting in Chicago mentioned earlier, earning a label of anti-Semitism in the process from neoconservatives like David Frum. Tonsor did not see, or did not think it important, to focus on the concerns of conservative intellectual Sam Francis who was writing in the late 1970s about the middle American radicals which formed the early intellectual roots of the Donald Trump phenomenon. But Tonsor never accepted the populist turn on the Right and while he referred to himself as a paleo-conservative late in life, if he had lived, I doubt he would have been a supporter of Trump.

This sort of discussion—about who is and who is not a legitimate conservative and why—filled the zeitgeist of Philadelphia Society meetings both then and now. The editors include a few of these but miss the wider picture about how conservative identity is reflective of debates over ordered liberty. They also miss many of the fireworks of Philly Soc meetings and therefore offer a thin and tasteless gruel of sorts in their selection of essays representative of debates within conservatism. It is not that what is featured is not useful. One yearns for the superstar meetings which combined Milton Friedman, Stan Evans, and Russell Kirk. Most of what is featured here is not a representation of what Philly Soc meetings were—a place to battle, to fight, and to elucidate what conservatism was (always ending over some scotch in the bar or hospitality suite).

The old debate about traditionalism and libertarianism is getting rather stale in recent years, and so is much of the discussion about ordered liberty. The recent Trump phenomenon, the rise of national conservatism and its place within a movement which focused on liberty and free markets, the emergence of populism in politics which reflects new alignments between working class Americans and the conservative movement, have made a lot of these debates rather esoteric, and uninteresting. Conservatism developed its ideas in the 1940s through the 1960s, and in doing so, decided to plunge into politics and policy. Their victories at that level (and at the state level) and the institutionalization of conservatism has made a lot of the debates over the direction of the movement and over ordered liberty a bit sterile, I’m afraid. It is of interest to the historian of conservatism but to most conservatives? I doubt it.

As someone who has taught conservatism for thirty years now and who has integrated conservatism into all my classes in modern American history, I find my students do not see the history of conservatism and its ideas in the same way I did as a college student in the 1980s. Ideas matter to them—even to those who identity as conservatives—but it is policy and political ideas rather than intellectual ones. More is the pity. For the ideas in organizations like Philly Soc transcend the limitations of politics and offer conservatives something outside the humdrum of beltway politics. They offer meaning and they offer a delineation of what we are and what we have stood for, and where we might go from here.