Whose Truth? Whose Power? 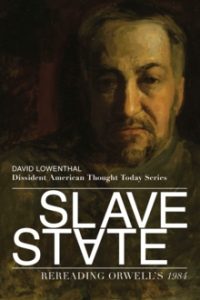 It is impossible to mention George Orwell’s name, let alone write about him (i.e., such and such is “Orwellian”), without legions of readers turning the page because they have heard it all before.

This is unfortunate, not least because Orwell hated clichés and wrote at length about how they rot the brain. It is doubly unfortunate since so much of his writing diagnoses the malaise and lunacy now gripping Western necks.

David Lowenthal finds something new to say about Orwell in Slave State: Rereading Orwell’s 1984, a title in the Dissident American Thought Today Series by St. Augustine’s Press. While not an American thinker, Orwell was surely a dissident, a primordial nonconformist who pushed against “smelly little orthodoxies” that, like corpse flowers in full bloom, turn the world of 1984 into a small, stinking hellhole where politics are not just personal but absolute and everything.

Lowenthal focuses his attention less on the hopeless politics of 1984 than the moral universe of Oceania, the dystopian England where 1984’s hero Winston Smith wallows. After a chapter on Orwell’s early moral and political thought, Lowenthal focuses on the cruelty that characterizes the world Winston inhabits and the world that Orwell saw coming for the rest of us. This cruelty is like pain caused by a deformity, in this case the deformity of lost belief. Orwell, Lowenthal explains, lost his religion, and so did the world, and this loss of an eternal plane has shrunk life to a single point, a closed room, where nothing is sacred, words have no meaning, history can never be written truthfully, and “the very concept of objective truth [fades] out of the world.”

As Lowenthal documents, Orwell, wanting something better for himself and others trapped in this closed room, grasped for a humanist response. What he imagined he projected in his essays and novels. While limited, Orwell’s humanism gave him keen sight into the human need for beauty, freedom, and honesty. He saw the cruelty that animates totalitarian regimes, specifically communism, the villain of 1984. He saw, too, the capacity for totalitarianism lurking in socialism, lackadaisical liberalism, amoral intellectualism, and technophilic corporatism.

Case in point is the philosopher-technocrat Yuval Noah Harari, counsel to Klaus Schwab, head of the World Economic Forum and proponent of Net Zero, bug-eating, and other future misadventures. Harari’s work with the WEF and his two bestsellers, Sapiens (2014) and Homo Deus (2017), privilege him with a platform sadly not afforded to thinkers like Lowenthal. From the great heights of Davos, Harari ruminates on the ugliness of human life. We live in a world bereft of objective values, he teaches, where no truth exists outside the laws of physics. Human rights are mere “stories,” and as for humans—creatures no better than animals—too many infest planet Earth. He speaks of bioengineering and artificial intelligence with an enthusiasm he does not have for the “useless class” of people who will be made “obsolete” by the miracles of science and technology. People are problems to be solved, say technocrats of today who worry about too many people, too much industry, and too much irrationality, and so say the maniacs who torture the good proles of Oceania.

Not much has changed between now and Orwell’s future-past.

Lowenthal makes a compelling case that 1984 offers a moral guide to readers by demonstrating the crumbling uselessness of power-centered morality. Power divorced from truth is the ultimate road to nowhere. It’s a road well-tread in most universities where, Lowenthal says, “faculty, administration, and students collaborate in fostering a radical contempt for their own country.” Graduates, “influenced in relativism in its many forms,” sneer as they were taught to sneer at liberal principles, those once-upon-a-time universals available to all that are now derided as Eurocentric, “white,” and exclusionary, and for that reason deserving of contempt and deconstruction.

“But why is power desirable?” Lowenthal asks. “The rational runs something like this. The major premise is that every human being is doomed to die, and that death is the greatest of all failures. To overcome death is the most important thing, and this can only be accomplished by merging one’s identity with an eternal human collective—i.e., with the Party.”

Contempt for the freedoms that a human being needs to thrive—freedoms more available in liberal democracies than in any other system—is old fashioned. In his own time Orwell witnessed, as Lowenthal puts it, that “the admiration of force and fraud ha[d] come to characterize a sizeable number of the intellectuals themselves.” Admiration has grown in the intervening years into a scandalous affair. Today, scholars cannot survive in the university system without committing fraud of some kind, even if it is only the “minor” fraud of making half-hearted bows to the golden calf now standing on the altar. Force is now the fabric of the thinker’s life. If anybody has doubts, watch what happens to those who object to the golden calf. Dialogue—meaning thought—is rare inside the disciplines. Postmodernists and their brethren baffle one another with the question “Whose truth?” without ever fencing with the more deadly interrogative, “Whose power?”

Rarely is the question of power asked in a serious way because the answer is understood. Whose power? My power. Do what I say. To ask “whose truth?” is to dissemble and provide cover for a conglomeration of power. This is how the story plays out in 1984. Winston Smith is destroyed by the power wielded by the cruel technocrat O’Brien. Winston, who attempts to live a moral life inside an amoral system, loses politically. He never had a chance. He betrays his lover and forfeits his beliefs. But, Lowenthal asks, does Winston lose morally? Did he ever have a chance? Was Big Brother too powerful, or was Winston’s vision of the human too thin, too godless to survive the assault of automatons like O’Brien? Lowenthal—and Orwell—leave these questions for readers to ponder. As for O’Brien and the people like him, Lowenthal is definitive: “O’Brien really loses because we know his belief in his power over reality is completely insane.”

Slave State meditates on issues such as this one, not at length but at speed. In a compressed style, Lowenthal, writing for the reader who knows 1984 well, sketches Orwell’s political and moral thought, examines the nature of good and evil in 1984, discusses the nature of the hell that is Oceania, and demonstrates through his reading of 1984 what can happen when philosophers, politicians, and an entire society follow faulty logic to the spot where it dead ends.

The problem with Slave State is that it is too short a book. An introduction and three short essays open many avenues of discussion, but Lowenthal never travels far down those lanes. One can only guess why Lowenthal took the shortcut. Maybe the book is meant as a classroom supplement. Maybe 1984, like a cliché, has exhausted itself. Regardless, Slave State is a fine text to accompany a reader’s jaunt through the hellhole world of 1984.

Robert Grant Price is a writer, a university and college teacher, and communications expert.