Wild, and the Problem of Evil 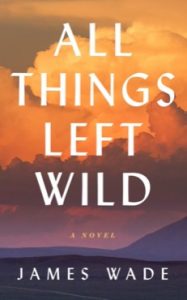 Life in itself is neither good nor evil; it is the scene of good or evil, as you make it. And, if you have lived a day, you have seen all: one day is equal and like to all other days. There is no other light, no other shade; this very sun, this moon, these very stars, this very order and disposition of things, is the same your ancestors enjoyed, and that shall also entertain your posterity.

Set in the Texas–New Mexico region, against the nineteenth-to-twentieth-century transition of an American West no longer conquering the frontier but on the eve of accepting corporate agriculture without abandonment, James Wade’s novel All Things Left Wild begins when two brothers botch an attempt to avenge their dead pauper father. Instead of stealing a horse from their father’s enemy, Randall Dawson, the Bentley brothers, Caleb and Shelby, end up fatally shooting Dawson’s son. A man of muted emotions, Dawson then proceeds to hunt down the fraternal fugitives who killed his boy.

But honestly, a feeling of damned if done or undone burdens the writing of this review. Something says I ought to write about this book from Blackstone Publishing because it’s by an author who lives where I live here in Austin. He also happens to be the husband of the daughter of my father’s wife. So any biases—“systematic errors” as the term is defined by Nobel economist Daniel Kahneman in Thinking, Fast and Slow (2011)—whether conscious or involuntary, can’t be shed. Most won’t even be acknowledged or admitted.

So while the deck may be loaded, and the cards in the present hand might be tilted, this reviewer is still willing to bet that one strong theme to Wade’s quasi-Western concerning two fugitive brothers revolves around whether the existence of evil is something stark and solid, or perhaps murky and malleable. Take, for example, a moment from the novel’s nineteenth chapter:

I took the flask from his hands and drank deeply.

“It weren’t no goddamned devil killed him,” I said. “It was me. You understand? And whatever unnatural thoughts you got, there ain’t nobody put ’em there but you.”

Shelby groaned. “So that’s it then, you think I’m evil.”

“Well, I didn’t. Fact is, I don’t think nobody’s evil. I don’t think there’s such a thing that even exists. The way I figure it, there’s people, some of ’em better than others, some of ’em worse, and every one of ’em has to make a whole bunch of choices, and then in the end it’s someone else gets to say whether them choices were good or bad.”

Before the killing, Caleb Bentley was just an adolescent with a childish system of morals not unlike Oliver Bonds who, at the beginning of Owen Egerton’s novel Hollow (2017), confesses that prior to the death of his own baby boy and the subsequent Job-of-Uz-like journey he must then undergo:

I believed, without ever saying it, that the world was basically good. I believed moral behavior was rewarded by the world. I believed cruelty to be its own kind of punishment. And though I never would have admitted it to anyone, least of all myself, I believed that the most horrible things don’t really happen.

Egerton and Wade are two writers from Austin who’ve written bildungsromane, coming-of-age novels, but also novels whose principal characters confront the question of evil. Egerton’s character Oliver must face (and perhaps eventually forgive himself for) responsibility for his son’s death. While the disenchanted Caleb in Wade’s tale dismisses all talk of devils, he is still young. The killing may not haunt him today, but in thirty years—as age and death creep ever toward one another—some dark nightmare may come lurking back, just as it did for middle-aged Oliver Bonds. For it is in “childhood, where every devil comes from,” says Dick Hallorann in Dr. Sleep (2013), Stephen King’s sequel to The Shining (1977).

For Caleb’s brother Shelby, the stakes are a bit different. As the narrator to Gabriel Mosley’s short story “A Man Stands Tall” (in The Masters Review, Vol. VI, 2017) observes:

His boys were acting out because of the loss of their mother, which was no doubt true. Leukemia was a brutal way to die. But all bullies have sob stories.

All bullies have sob stories—and all Shelby Bentley does in the above exchange is sob, for toward his brother he has been nothing but a bully. He has bedeviled his brother’s childhood (and perhaps even his own).

Man is so miserable that, directing all of his conduct to satisfy his passions, he ceaselessly moans under their tyranny; he can neither bear their violence nor the violence he must do to himself in order to free himself from the yoke; he finds disgust not only in his vices, but also in their remedies, and can neither accommodate himself with the sorrows of his maladies nor with the work of his cure.

Randall Dawson, hunter of the fugitive brothers in All Things Left Wild, preaches a silent sermon to himself that counterpoints the newfound outlook of his prey, Caleb Bentley:

We will answer with every child born to violence and every man prone to hate. We will answer with this American disease of independence. Men should not be free. All types of men—the greedy, the lazy, the privileged few—prey on the minority. The minority being those men who are both honorable and empathetic and willing to sacrifice for the greater good.

In these words might be heard the typical rural, “compassionate” conservatism of late-twentieth century Texas—or at least echoes of the rhetoric that that conservatism once espoused. (The rhetoric of a president from Texas on the eve of his invasion of Iraq …) But one might also hear all throughout All Things Left Wild echoes of McCarthy’s All the Pretty Horses (1992), particularly Cormac’s passage below compared to Wade’s above:

Like my father he hated bloodshed and violence. But perhaps he did not hate it enough.… In the end we all come to be cured of our sentiments. Those whom life does not cure death will. The world is quite ruthless in selecting between the dream and the reality, even where we will not.

The world is ashamed of being virtuous.

Though at the moment this reviewer feels no shame, plenty of unsureness remains as to whether Wade has been here given a fair and virtuous reading. Perhaps the reviewer’s readings are, in general, too greedy—too diseased by independence—to truly portray what is great about All Things Left Wild, because it seems to be the kind of novel that requires a better reader than the one written about in this review. For though all quotation may be an admission of unoriginality, one may add that, as Oscar Wilde once taught, criticism remains “the sincerest form of autobiography.”

Christopher Landrum’s work has appeared in Fortnightly Review (UK) and the Berlin Review of Books, as well as several central Texas newspapers. He lives in Austin, Texas and writes about what he read at Bookbread.com.