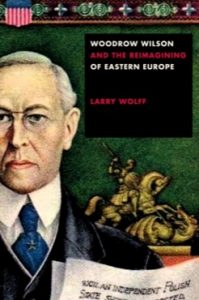 This work is a species of modern intellectual history in the tradition of Orientalism, by Edward W. Said,[1] and Imagined Communities, by Benedict Anderson,[2] works that have been influential in recent scholarship on politics and history, even if Said’s controversial book has had more influence among undergraduates and activists than with serious scholars. Anderson’s study is more interesting and likely more enduring, even if only for the fact that it resurrected the study of nationalism, a concept whose death has been loudly proclaimed or quietly assumed for more than a century.

These authors examine and critique the perceptions, assumptions, and attitudes that influential explorers, writers, or statesmen have held about other peoples and cultures, which some scholars refer to as “mental maps.” These “imagined communities” or “mental maps” are important to the extent they are widely accepted and influence powerful people or states. The scenario Larry Wolff examines regards Woodrow Wilson’s flawed effort to reorganize Central and Eastern Europe following World War I.[3]

Wolff shows how the mental maps in Wilson’s mind guided his efforts to draw new borders for the peoples he wanted to liberate from the Austro-Hungarian, Ottoman, and Russian empires at war’s end. Yet like any perception, a mental map can be illusory, as was the case for Wilson, who often imagined a much simpler and more coherent ethnographic map of Europe than existed on the ground. And Wilson’s own mind was important not because he was the first (and last) president to have earned a Ph.D., but because he ignored a lot of good advice from the members of the Inquiry, his extensive brains trust, and from Secretary of State Robert Lansing. Most or all of their advice pointed out the contradictions or errors in his plans.

While Wilson was reluctant until the last minute to dismember the Austro-Hungarian Empire, once he decided to liberate the empire’s Croats, Czechs (or Bohemians and Moravians), Italians, Poles, Romanians, Serbs, Slovaks, Slovenes, and Ukrainians (or Ruthenians), Wilson embraced the cause with a passion that clouded his thinking.

That passion was summarized in the phrase self-determination, a coinage with a fitful birth. Wilson’s “Fourteen Points” speech of January 8, 1918, did not cite “self-determination.” It was used in his “Four Principles” speech the next month, but not as one of the four principles. It was excised from Wilson’s own draft covenant for the League of Nations. Lansing was aghast at the phrase, sensing its danger. Wilson finally admitted, “When I gave utterance to those words, I said them without the knowledge that nationalities existed, which are coming to us day after day.”[4]

Wilson failed to appreciate that self-determination for some would require its denial to others in Europe’s patchwork demographic map—the real map, about which his advisors were well-informed. The Czechs demanded that Czecho-Slovakia’s borders model the frontiers of the old Kingdom of Bohemia, playing down the presence of its 3.1 million Germans, whom Hitler would exploit in the run-up to World War II.

When informed about the Bohemian (or Sudeten) Germans aboard the ship taking him to Paris for the peace talks, Wilson expressed surprise, citing Czecho-Slovak leader Tomas G. Masaryk, “Why, Masaryk never told me that.”[5] Wilson’s surprise was itself oddly surprising, since Wilson’s own 1894 book, The State, noted the issue of the Bohemian Germans.[6] Further illustrating the new republic’s challenges were the 1.9 million Slovaks, 745,431 Hungarians, 461,849 Ruthenians, and 75,853 Poles it included, without consulting them, although the Slovaks were initially happy.[7]

The Sudeten Germans were angry at their exclusion from Austria and Germany, yet their own desire for self-determination was not seriously considered, despite their predominance among the owners, managers, and workers of Czecho-Slovak industry. Hoping to assimilate them, Prague met the terms of the minority-rights treaty it signed as a condition of independence, guaranteeing minority voting rights, language usage, eligibility for public office, religious freedom, and other rights. Indeed, Germans served not only in the Czecho-Slovak parliament but in the cabinet, too.

Yet Prague’s eagerness to govern these Germans was matched, following the onset of the Great Depression and rising Nazi influences, by Berlin’s determination to unite all Germans. As early as October 14, 1918, German Field Marshal Erich Ludendorff said, “There can be no doubt that, sooner or later, the Anschluss of German territories will take place.”[8] The rest is history, a more instructive guide than a mental map.

Wolff has authored many studies of the West’s discovery of Central and Eastern Europe,[9] but this scholarship has not improved the mental maps of West European elites regarding the peoples and cultures of this region, which are still believed to be “backward” in the usual measures of progress, despite mounting evidence to the contrary.[10] Indeed, Wolfe argues that “Eastern Europe” was a place imagined by western elites to make themselves feel superior. “It was Western Europe that invented Eastern Europe as its complementary other half in the eighteenth century, the age of the Enlightenment,” Wolff says. “It was also the Enlightenment, with its intellectual centers in Western Europe, that cultivated and appropriated to itself the new notion of ‘civilization,’ an eighteenth-century neologism, and civilization discovered its complement, within the same continent, in shadowed lands of backwardness, even barbarism. Such was the invention of Eastern Europe.”[11]

Restoring history and literature as rich sources of explanatory power, the work of Wolff and scholars like him is a welcome relief from the number-crunching accountants who have taken over the social sciences. On one hand, mental maps, like most perceptions, are highly subjective constructs that can appear and disappear on a whim. They encourage use of the much-invoked “global community,” the silly neologism that tries to give form to a hope. The rise of identity politics promises new “imagined communities” built on the sand of ethnicity, gender, or sexual identity. On the other hand, it can be useful to be aware of the influence of these illusory concepts.

The idea of “self-determination” continues its hold on the hearts and minds of peoples yearning to breathe free. Kosovo, for example, established its independence in 2008, making it the world’s second-youngest country (after South Sudan, officially established in 2011). The landslide winner of Kosovo’s parliamentary elections in February 2021 was the Self-Determination Party (Vetëvendosje), which made Kosovo a rare Muslim-majority, leftist-governed country that is nonetheless a U.S. ally.

Self-determination will not die until nationalism does, and nationalism will remain alive and kicking as long as elites continue to construct empires as the “imagined communities” they prefer to govern. Nationalism has long reflected the flight from empires and the elites who control them. Many nation-states emerged from the collapse of the Austro-Hungarian, Ottoman, and Russian empires in 1918, but imperialism quickly rose from their ashes as a global socialist, or communist, movement. With the collapse of this Soviet-led empire by 1991, new states again emerged—or re-emerged—just in time for the debut of the soft empire of globalization, whose European emissaries both strengthened the European Union and expanded it from six countries in Western Europe to as many as twenty-eight across the Continent. Yet the British vote to exit the EU in 2016 revived the flight from empire, breathing new life into nationalist self-determination. All of which exposes some strange contradictions in the politics of our Leftist elites, including a century-old hostility to nationalism, an even older hostility to its opposite governance model, imperialism, and—yet—a stubborn refusal to surrender their imperial dreams.

Kevin J. McNamara, an Associate Scholar of the Foreign Policy Research Institute, Philadelphia, PA, is the author of Dreams of a Great Small Nation: The Mutinous Army that Threatened a Revolution, Destroyed an Empire, Founded a Republic, and Remade the Map of Europe (Public Affairs, 2016), a narrative history of the dramatic events of World War I and the Russian Revolution that led to the founding of Czecho-Slovakia.

[3] While Wolff sticks to the traditional dichotomy of Eastern and Western Europe, the triptych of Western, Central, and Eastern Europe makes more geopolitical sense. While the eastern Soviet Bloc of nations imploded, liberating Central Europe, Eastern European countries such as Belarus, Moldova, and Ukraine remain within Russia’s reach, if not grasp.

[9] The Idea of Galicia: History and Fantasy in Habsburg Political Culture (2010), Venice and the Slavs: The Discovery of Dalmatia in the Age of Enlightenment (2002) and Inventing Eastern Europe: The Map of Civilization on the Mind of the Enlightenment (1994), all three from Stanford University Press.

[10] I elaborate on this in a forthcoming article, “Central to Europe,” in The National Interest.

[11] Inventing Eastern Europe: The Map of Civilization on the Mind of the Enlightenment, by Larry Wolff (Stanford: Stanford University Press, 1994), p. 4.