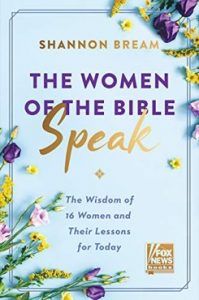 The Women of the Bible Speak: The Wisdom of 16 Women and Their Lessons for Today
By Shannon Bream.
Broadside Books, 2021.
Hardcover, 256 pages, $26.

It’s not every day that a major news organization promotes a book entirely about Scripture, much less one about women in Scripture, so when Fox News throws its clout behind a book about both, we ought to take notice. Shannon Bream’s The Women of the Bible Speak: The Wisdom of 16 Women and Their Lessons for Today is certainly worth the attention, and not just from women. Bream successfully combines what she describes as “endless hours of work and research” by Mary Grace DuPree with deep reflection on the fascinating details of these women’s stories and the inspired messages behind them. Anyone who has ever assumed that the Bible is only about men may be surprised to learn that even in ancient Israel, beside every great man stood a great woman.

Bream, a nightly anchor and chief legal correspondent with Fox News, entices the reader with the well-known story of an unnamed woman with a hemorrhage who dares to wade into a thickly massed crowd surrounding Jesus. Bream highlights an important detail that might easily be lost on a modern audience: the woman’s constant bleeding not only renders her unclean, but risks rendering others ritually impure as well. Desperate yet filled with faith, the woman reaches out to Jesus and touches his clothes. Her boldness is rewarded not only with a miraculous healing, but with public acceptance from Jesus. Thus, early in the book, Bream establishes a number of themes that she skillfully returns to throughout: the impact of the women’s initiative, their reversal of fortune, and the dignity and respect that is due to them despite their lowly status in society.

From there, Bream pairs together sixteen women from both the Old and New Testaments, based on their character traits or roles in salvation history. She explains the cultural context of the women’s various predicaments and relates the messages of their stories to modern circumstances. For instance, she connects the loneliness and isolation of the woman with the hemorrhage to the modern experience of living during the COVID-19 pandemic, marked as it was by a fear of touching and contaminating our neighbors.

Bream’s poignant observations encompass more timeless themes as well. At the conclusion of her discussion about Sarah and Hagar (“Women of the Covenant”), she reflects on what could have been if the two women—at odds with each other over their relationship with Abraham and the two sons produced by the bigamous marriage—had instead “reflected their covenant with God by entering into a covenant with each other.” Bream further invites us to contemplate “a world in which the ancestor of the Jews [Isaac] and the ancestor of the Arabs [Ishmael] had grown up arm in arm.” She concludes that compassion can change the course of the world, a compassion that comes from truly reaching out and seeking to understand our opponents. Such insights are deepened in the subsequent chapter on Rachel and Leah, who are similarly at odds over Jacob, but with the added tension of sisterhood.

Bream analyzes the tensions of Rachel and Leah’s complicated relationship—they are both biological sisters and sister-wives—and then poses a question that cannot fail to ignite a spark of self-reflection: “How much easier would my life be without this irritating person in it?” In response, Bream observes that “the Rachels in our lives, the people who force us to deal with difficult circumstances, can also be the ones who push us into a deeper relationship with God.” In a modern world that values minimizing discomfort at all costs, Bream reminds us that God’s ways are not our ways, and that we ought to look more seriously at the challenges presented by the people who annoy us and the situations that seem unbearable.

The book is filled with insights drawn from the stories of women overlooked and forgotten in their own time. Sadly, these women are too often treated the same way by readers of the Bible today. The story of Tamar (Genesis 38), for example, certainly is not one for the Children’s Bible, as Bream points out. But in any serious exploration of the role played by women in the Bible, we must probe beyond the stories customarily read aloud in church. The story focuses on the concept of levirate marriage, whereby a man’s next of kin is obliged to marry his widow should he die without providing an heir. The firstborn son is then “credited” to the deceased relative, and the child receives his inheritance.

After Tamar’s husband is struck down by God for his evil ways, his brother is obliged to provide Tamar with a child in accordance with levirate practice. But Onan is not too eager to share his inheritance with a child that will not be considered his own, so he spills his seed on the ground rather than impregnating Tamar. He too is struck down and killed for his selfishness. By this point, Tamar’s father-in-law, Judah (founder of one of the twelve tribes of Israel) begins to have doubts about handing over another son to Tamar. So instead of adhering to levirate law, he delays Tamar’s marriage to the son next in line. The delay drags on for years, leaving Tamar with few options. Upon hearing that her newly widowed father-in-law is coming to town, she dresses up as a prostitute. Judah easily falls for the trap, impregnating her in the process. Unaware of his role in her illegitimate pregnancy, he later calls for her to be killed in accordance with the law. But Tamar had cunningly planned for this moment. Having collected Judah’s seal, cord, and staff as a promissory note, she quietly reveals that he is responsible for the pregnancy he tried to deny her. Judah humbly acknowledges his unjust treatment of her and even states, “She is more righteous than I.”

Many lessons may be drawn from this story. Bream focuses on the fact that Tamar “chose not to publicly humiliate the man who was trying to have her executed. She invited him to connect the dots and then awaited his decision.” Bream concludes, “seeking justice doesn’t require humiliation; we can advocate for what is rightfully ours without destroying others in the process.” Sometimes, of course, only public confrontation will bring justice, but one cannot help but wonder how different our current climate would be if more leaders seriously considered swift, private correction as an option.

Bream also invites us to take a closer look at the significant role women played in bringing about our salvation history. The Bible writers knew it. Matthew specifically mentions Tamar in his genealogy of Jesus. He recognized the impact of her daring initiative amid scandal and injustice, despite her unorthodox and morally complicated approach. Two thousand years later, it is time for a modern audience to do the same. As Bream demonstrates, the insights and lessons of these women’s stories are shockingly relevant.

The story of Miriam is another example. Described as a prophetess, she accompanies her brothers, Moses and Aaron, as they lead the Israelites out of Egypt. Miriam makes a near-fatal mistake, however, when she publicly criticizes God’s chosen one (Moses) and is rebuked. Bream reminds us that Miriam taught her community “how to take chastening from God when it was called for and how to own a mistake, even when that mistake happened on the public stage.” Politicians, take heed! Miriam speaks to you from the grave.

Yet the modern applications of Bream’s insights are not limited to public life. She also encourages readers to use the wisdom gleaned from the stories of women in the Bible to “seek God’s truth, and try to lovingly bring peace to all the frustrations we encounter in our lives.” Perhaps most importantly, we must lay our troubles at God’s feet, as did Hannah. Hannah’s faith and trust in God—coupled with such fervent prayer that the priest Eli accused her of being drunk—led to the auspicious birth of Samuel, whom Michael Coogan aptly describes as a “king-maker” and a “king-breaker.” Samuel went on to become a prophet, and to anoint David, ancestor of Jesus, as king.

Bream invites her readers to consider the wonders God can work in our lives if we follow suit and bring our most intimate needs and concerns to heartfelt prayer. The ultimate goal of such prayer, as Bream reminds us, is to enter into a “two-way relationship” with God, like the one Mary Magdalene finds when she encounters the risen Jesus at his tomb. Plagued by doubt and misunderstanding, as so many are today, Mary Magdalene addresses Jesus as “Rabboni.” Bream focuses on the intimacy of the Aramaic word, which may be translated as “my teacher.” Leaving aside scholarly debates such as what the use of the term Rabboni actually indicates about Mary Magdalene’s understanding of Jesus, Bream focuses instead on more pastoral concerns. In the context of a book primarily about seeking wisdom and faith, Bream’s point is well-taken. It is in the context of a deeply personal encounter with Jesus that believers are drawn close to him and trained to become apostles like Mary Magdalene and the other women at the tomb.

Readers seeking scholarly debates on this topic, or on a comparison of the faith expressed by Mary and Martha of Bethany, for example, should turn instead to biblical commentaries such as the Word Biblical Commentary or Sacra Pagina series. Similarly, readers interested in a more intense cultural and religious exploration of the lives of women in Ancient Israel should look to Rediscovering Eve: Ancient Israelite Women in Context by Carol Meyers or Families in Ancient Israel, edited by Leo G. Perdue, et al. But readers seeking thoughtful and practical insights based on the often overlooked contribution of women should consider Bream’s book as a gateway into a richer and deeper understanding of the Bible and the lessons it offers us today.

Shannon Bream brings a fresh voice to a series of stories that, situated in ancient Israel, risk being so “other” and off-putting to modern readers that they become inaccessible. She is unafraid to speak bold truths to a world that seemingly prefers silencing the truths of the Bible to proclaiming them the way Jesus himself instructed. As an inspired voice amid naysayers in the public arena, Bream exemplifies the courage and wisdom she praises in the lives of these sixteen women. At the same time, she challenges her readers—who most certainly ought to be men and women alike—to share these lessons with a world desperately in need of “good news.”