The Mysterious Being in the Ring 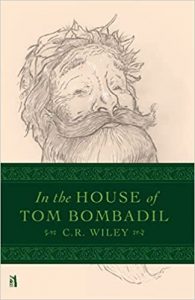 Old Tom Bombadil is a merry fellow, but what is the point of him? He is one of the most enigmatic characters in J.R.R. Tolkien’s The Lord of the Rings, and perhaps also the most polarizing. Some readers love him, others despise him; Peter Jackson cut him out of his film adaptation.

Of course, characters may be ends in themselves to authors and readers. If Bombadil pleased Tolkien and delights some of his readers, that is justification enough for his place in the story. But some of us are inquisitive enough to ask why Tolkien put Bombadil into the tale and kept him there, and what is it about him that resonates with (some) readers? Are there hidden depths to Bombadil, or is he just a silly, if oddly powerful, figure who saves the hobbits a couple times before disappearing from the story and being replaced by more interesting characters? With his slim new book, In the House of Tom Bombadil, C.R. Wiley has provided an insightful and entertaining study of Bombadil’s significance. The book is written for all of those who love Tolkien, and reading it is like listening to a learned, chatty professor or pastor — Wiley has been both.

The question is less who Bombadil is, though Wiley considers the options. Bombadil is almost certainly a Maia — in Tolkien’s legendarium the Maiar were a lesser angelic order capable of taking a physical form, and their ranks included Gandalf, Saruman, and even Sauron. Had The Silmarillion been published alongside The Lord of the Rings as Tolkien wanted, Bombadil’s nature would likely have been more apparent to readers. Knowing who Bombadil is explains his power, but it makes him even stranger. Bombadil is the stuff wizards and dark lords are made of, but he lives “withdrawn into a little land” and often appears ridiculous. And yet Tolkien thought Bombadil brought something important to the story beyond his place in the plot, though he was reluctant to analyze the matter closely.

Tolkien’s tales are not allegorical or didactic, but their themes and characters are still rich with meaning, and Wiley’s examination of Bombadil is not in vain. His approach is full of digressions that meander variously toward scripture, theology, and classical education; but a coherent theme develops through them, and readers will generally find the asides and rabbit trails intriguing rather than wearying. Wiley does not hide his views (he is, after all, a reformed pastor) but he tends to explore and suggest, rather than pounding the table or the pulpit. And he makes a compelling case that thinking deeply about Bombadil uncovers important insights and lessons for us.

For example, Wiley contrasts Bombadil and Saruman in order to illuminate the difference between dominion and domination. Bombadil is master of his little land, but he does not treat it as a machine to be ordered according to his schemes, as Saruman does. Their differences extend to their epistemologies, where “two different understandings of knowledge work themselves out in different ways of life — one catches things to control them, and another frees them in order to commune with them.” For Saruman, as for modern man, knowledge is power, a tool to be used to further his desires. For Bombadil, knowledge is understanding that leads toward communion and friendship. Bombadil’s mastery is ordered toward the good of his domain, with those within it fulfilling their natures. Wiley even suggests that the power of Bombadil’s seemingly nonsensical singing is linked to this understanding of nature, which is able to recall the music of the Ainur, that is, the music of creation.

Bombadil provides an early, positive example of the themes that govern much of Tolkien’s story, which is not against power as such, but against domination. Thus in contrast to the ambitions of Saruman, Bombadil is willing to accept limits, and even to impose them on himself. He is Master, but rather than hunt the seductive lure of domination, with its inevitable cruelties, he is a protector of others. And while we know little of his tasks in Middle-Earth, his indispensable aid to the hobbits suggests that he is fulfilling them in accordance with his nature and divine will.

He is also a cultivator. Though he lives in the wilderness of the Old Forest, when it comes to his home, “Tom’s no hippie. His home is well ordered and tame — it’s domesticated.” Just as the other inhabitants of the Old Forest have their proper habitat, so does Bombadil, and he shapes it for himself. Wiley sees in this distinction between Tom’s land and his home a difference between two forms of dominion, “rule and cultivation.” He argues that “we must make a place for ourselves in the world, and a place where we have ordered things to our liking. But that isn’t everything. And that doesn’t mean that we’ve abdicated office when we leave things alone.” That it is often part of our dominion to let things be, for their good and our own, is a recurring theme of Tolkien’s tales.

Tolkien also shows us that hierarchy is distinct from domination — having authority over someone is not the same as dominating that person. Thus, reflecting on Bombadil’s relationship to Goldberry, Wiley observes that “in a vertically ordered world, things can freely be themselves, even when they are subject to others. Mastery does not equal ownership — even when people are subject to you.” In our world as well as Tolkien’s, power, dominion and hierarchy are natural and unavoidable, but they must themselves be subject to limits arising from the moral and natural order of the universe, and ultimately of God.

Despite glimpses of transcendence, God is largely absent from The Lord of the Rings. But He is present in Tolkien’s broader mythos, and Wiley does not hesitate to discuss Him. This is most apparent in his chapter on the barrow-downs, which is a lot like an Easter sermon filtered through Bombadil. Christian readers will appreciate much of it, but Wiley’s enthusiasm for his subject leads him to overreach in his exploration of Bombadil as a Christ-figure. Oddly, he errs in the opposite direction in his discussion of Goldberry, where by dwelling too much on possible dark inspirations from water spirit folklore, he suggests far more malevolence in Goldberry’s origins and natural disposition than the text can support.

If there is a main complaint against this book, it is the complimentary criticism that it should have been longer. Wiley ought to have further explained how the themes he sees in Bombadil were developed and fulfilled throughout The Lord of the Rings — which would also have allowed him to better engage with other scholars of Tolkien. But except for the contrast with Saruman, such comparisons are abbreviated, and some important ones are neglected entirely. There is, of course, the obvious political application comparing Bombadil’s dominion to how Aragorn as king gave power to regions and peoples. With regard to family and home, he could have examined Sam’s return to his community, family, and garden, which were the focus of Tolkien’s original epilogue, and which were still (in abbreviated form) given the final words of the story.

On the subject of endings, Wiley concludes that the point of Bombadil is that he “is the ending, as in a happy ending.” Bombadil certainly is happy, and will remain so. The encounter with Bombadil early in the story shows much of what is to be hoped for in the end, including a happy home cultivated for the good of the family, and dominion that is not domination. Even Frodo, wounded beyond healing in Middle-Earth, finds in leaving it that his fair vision in Bombadil’s house is made real. Wiley’s brisk, thought-provoking book helps us see how Bombadil, far from being a superfluous oddity, helps us envision both happiness and a home in this world — and beyond it.

Nathanael Blake, Ph.D., is a Postdoctoral Fellow at the Ethics and Public Policy Center.