Over the course of nearly fifty years spent in the thick of intellectual controversies, Russell Kirk wrote hundreds of essays addressing the political, philosophical, literary, and spiritual elements that compose a humane civilization. In addition, he delivered lectures across the country and penned a popular syndicated newspaper column articulating the norms that sustain America’s civil social order. 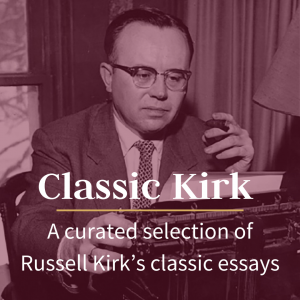 Drawing from these abundant sources, this new section will feature each month an essay selected from among the best of Kirk’s writings. Occasionally, it will weave in some hard-to-find pieces and curiosities to portray his full range of interests. It is surprising that so many of these essays have stood the test of time, even though they reference contemporary events here and there. Like the writings of his exemplar Edmund Burke, Kirk’s circumstantial instigators are essential to the development of his arguments, but frequently move from circumstance to illustrating first principles. Seeing his role as a “guardian of the Word,” Kirk took the long view in his dedication to elucidating and transmitting an inherited body of learning.

In a descriptive headnote for each month’s essay, I will provide the timeframe and context for the piece, and occasionally add some personal references. My dad has been called an “integrated man” not simply in the sense that his public and personal lives were intertwined, but in that his beliefs and actions reinforced each other to a high degree. One of these beliefs was that each generation must struggle courageously to conserve and renew moral and social order.

As he wrote in Redeeming the Time, “It is by no means certain that our present moral and constitutional order is providing sufficiently for its own future. Modern men pay a great deal of attention to material and technological means, but little attention to the instruments by which any generation must fulfill its part in the contract of eternal society.” In his own life, Russell Kirk labored with intellectual honesty, creativity, and cheerfulness to bring the filtered wisdom of past generations to our age and to posterity.

We at the Kirk Center plan to build out this Classic Kirk collection as a digital resource available to a wide audience. I hope you enjoy these essays and that through them, across time and space, in one of my dad’s phrases, a “conscience may speak to a conscience.”

The Constitution and the Antagonist World

Virtue: Can It Be Taught?

With Our Children Lies Our Hope

What Is All This?

The Humane Economy of Wilhelm Roepke

Order: The First Need of All