Lessons from Toyland: A History of Adventure

[Editor’s Note: “Lessons from Toyland” is a holiday essay to be published in three installments: Part I, December 22; Part II, December 26; and Part III, January 2, 2022. Many thanks to the imaginative author for this Christmastide contribution.] 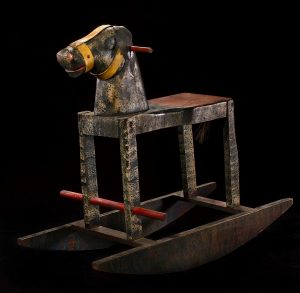 Here we must make our choice. Either we take the speed and excitement of automobiles, airplanes, and rocket-ships, or else the heathery paths through Toyland, for in Toyland, the only things that fly have feathers. Some have thought that trains belong to Toyland. For my part, I am unsure if trains are not just the means most would prefer to travel there.[1] Trains violate the one rule of artisanship in Toyland: no mechanism cruder than spring-loaded works. The springs and gears of Toyland’s music-boxes, glockenspiels, and Baroque figurines exceed the craft of the old Swiss clockmakers for intricacy and beauty. They are among Toyland’s finest specimens. Somehow, the train simply fails of the ideal, and yet such a judgement seems cruel. After all, gunpowder is allowed in Toyland; why not steam? And steam, as we have already established, is a sweet vapor that rises from herb and leaf to delight us in Toyland. Perhaps the train is just a living teapot, with a smokestack for a spout, two lanterns for eyes, a grill for a broad smile, and wheels for feet. Every toot is like a little signal from a boatswain’s whistle. Yes, perhaps the train belongs in Toyland after all, but only as a lively character and not as a carnival thrill. We cannot be too careful. Building rails throughout Toyland would bring down the Kingdom. The train enthusiasts are of another country. They belong more to the Old West with its dynamite, than to the quieter folk of Toyland.[2]

The quest is a search for a thing, a place, or a person or people. In Toyland, it is an elaborate game of hide-and-seek. The pirates hide the gold; we look for it. The fountain of youth is fabled to spring beyond the last peak, and we tramp over the hills to find it. The fairy gems are said to be hidden under the green forest, and we tunnel down for them. Quick! The redcoats are gathering on the green! We engage them. The battle is very often part of the quest. In a battle we discover and challenge our opponent. Or we redeem a precious object or captured person. We win the right of use by sheer adventure and wit. Quests are sometimes very long affairs. They take the most commitment of any excursion in Toyland. The most experienced travelers to Toyland play at quests for weeks, months, and even years. They build little episodic stories inside their quest and often form circles of friends dedicated to carrying on the adventure. They even give their quests formal names. All they need say to each other is, “Let’s play ‘Countries.’ Let’s play ‘Mystery.’ Let’s play ‘Marching,’” and the main characters assume their places without further explanation. These names have no meaning for visitors who have yet to be brought into the story.

The chase is livelier than the quest, but also riskier. If not done right, quarreling breaks out and we are banished from Toyland altogether. The chase is like a game of tag, with either imaginary characters or ourselves as “it.” Sometimes we are hunting, sometimes horse racing. Or we are romping with the shepherds on the hillside, or chasing little people in the vines and thickets, innocently and merrily. Sages in every country have dreamed beautiful visions of these chases: “Wee folk, good folk, / Trooping all together.” Stevenson’s fluttering shadows and wind-tossed nights are all part of the chase. Perhaps we are the ones being chased and we must get away. We could be chased at any moment in Toyland; we never know. This is why house-building is the first thing we do after we are dressed up. Only the foolish do not think of houses. There is another escape though. One single word spells rest and safety, “Uncle!” Be careful! Crying “Uncle!” ends everything. There is no getting back to the play after someone has said that Final Word. Toy-folk are better skilled at the chase than ever to say “Uncle!” They always know just where to hide, or how to get some feature of the land between us and them to give everyone a rest. We freeze and start again. If they get away, we may have to initiate a quest before we can resume the chase; if they are caught or found, then we may begin the merriment of a song, dance, or feast.

And so we come to dance and song, the last form of the excursion. Speaking in rhyme is the finer art of play now lost. Children once knew by heart the jolly old songs, but now, in our world of clamor and distraction, we are lucky if we can stammer out one coherent couplet. Permit us, then, to take a sampling of the sorts of songs that would well suit the folk of Toyland:

To these songs, we see the shepherd folk take to their single dances with spritely steps on the hillside. We find a glade, we form a circle or a line, and we dance out our jig or hornpipe of pull-bys, sachets, rigadoons, petronellas, allemandes, and poussettes. I once danced a dance so vigorously and exactly that I never wanted it to end and believed I could go on forever.

The instruments in Toyland are just as invigorating as the dances, for they are all of simple and exquisite make, with clear tones to thrill the heart. Little pipes and flutes, dulcimers and lutes, harps and bells, violins and mandolins are played by the wandering minstrels of Toyland. Toy-folk are ignorant of loud concerts and they do not celebrate jingoism in music. They prefer chamber music to grand orchestras, and the simple fife and drum to brass bands.[3] The only brass-wind instruments in their country are trumpets and bugles, but they stick to the quieter instruments for their dances. We have almost entirely lost their repertoire of tin-whistle airs, though I have heard that they are something like a cross between Scotch melodies and Baroque compositions. Giovanni Gastoldi, Clément Janequin, and John Playford approximate the style. Toy-folk still use the Dorian, Lydian, and Phrygian modes, and when they are at music and dance, they imitate the Thracian muse of Orpheus. Dance and song are among the most artful activities in Toyland, but are so far removed from our everyday experience as to seem antiquated to our tastes. The Schuhplattler, Barynya, Tamzara, Dabke, Kolo, Tarantella, Tourdion, and Morris Dance are long forgotten and we do not remember when folk went abroad with rings on their fingers and bells on their toes.

If I am allowed to break through the enchantment of Toyland for a moment, I will attribute many of its features not to children or childhood, but rather to the toymakers themselves. We have nearly forgotten them, just as we have forgotten the coffee-men and coffee-women who once served the great wits of London. Mass-produced toys have dispelled from our memories the marvel of watching a craftsman make for us a treasure from inanimate wood and velveteen. Throughout old Europe, highly skilled artisans plied their trade of toy-making to the endless delight of generations of village children. Much like storybook illustrators, these artisans balanced decoration with simplicity and encouraged imagination without resorting to complicated mechanisms. In little cottage shops, they hammered away at rocking horses, painted dolls, marionettes, little coaches-and-six, tin whistles, wooden soldiers, singing birds, dancing men, marching drums, and small furniture. Not only did children enjoy receiving toys, but they loved the spectacle of making toys. It is that delight which enlivens Godfather Drosselmeyer in Hoffmann’s old German tale, or Geppetto in Collodi’s Italian stories.

The toymaker’s place in society has vanished with history, but he was the one person who kept old and young together. Throughout his lifetime, a toymaker would come to know at least four or five generations inside his own village. He told the stories that made heroes out of old hats and war horses from broomsticks. He was always a jovial character and content at his work; a carpenter, a tailor, a glassblower, a tinsmith, a shoemaker, and a painter all rolled into one. His fate was forever linked with his village, and when that died, so died he.

The beauties of Toyland lived on in the old nurseries well after the toymakers ceased their work, but when they too fell to technical and social progress, the glories of Toyland faded into the background of our imaginations. We now mostly read of them rather than enter into their delights. But when our minds no longer recognize the fashions of play which graced our early childhood, our hearts remember. Those who play in Toyland are few and far between, but they stand out to us all the more for transcending the distraction and confusion of our own cluttered playrooms. Perhaps we remember our former selves! When our heart is suddenly smitten by a piercing memory, let us resolve to follow it back to that enchanted land, of which we once knew so much, and loved to spend many an hour in adventures of our own contriving.

E. Wesley Reynolds, III, PhD, is Director of the Wilbur Fellows Program at the Russell Kirk Center, Instructor of History, Northwood University, and author of the forthcoming book in January 2022, Coffeehouse Culture in the Atlantic World, 1650–1789 (Bloomsbury Academic).

[1]. Mr. Disney seemed to think that trains are the essence of Toyland, but Mr. Rogers has since shown us with his trolley that they are quite unnecessary to the Kingdom. Incidentally, Mr. Rogers’s television program was the closest of its kind to Toyland, though it failed in ultimately transporting us because of its psychology. It was never intended to be purely imaginative. Still, what made the Neighborhood charming was Rogers’s insistence that fillers such as distracting animation or flashy sets only hampered our imaginations by burdening us with gimmicks. While Disneyland may have been a stroke of genius, especially its wholesome Main Street, U.S.A., Disney did not fully understand the difference between gimmick and imagination, as the failed futuristic utopias of Tomorrowland and Epcot proved.

[2]. Incidentally, the miners of Toyland only cary pickaxes and hand-pumps. They are not “trying to tear the mountains down to bring in a little more.”

[3]. Tchaikovsky and Victor Herbert did set Toyland to symphonic music, but that is not quite the same thing as entering Toyland and playing its own instruments for yourself.